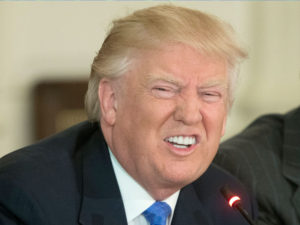 Three U.S. senators — two Democrats and an independent who sides with Democrats — have broached a subject that’s on the minds of millions of Americans.

If we’re going to demand and accept the resignations of senators and House members over allegations of sexual abuse, assault and harassment … how about demanding it of the groper in chief, Donald John Trump Sr.?

My distaste for Donald Trump as president of the United States is documented quite thoroughly on this blog. He has behaved like a slug and a boor among women. Moreover, he has actually bragged about it!

Now we hear from Sens. Bernie Sanders, I-Vt., Corey Booker, D-N.J., and Jeff Merkley, D-Ore., all of whom have said that the president should resign just as Democratic Sen. Al Franken, Republican Rep. Trent Franks and Democratic Rep. John Conyers have done.

I won’t climb aboard that hay wagon just yet. However, Trump and his acknowledged misbehavior — and the myriad complaints and allegations that have been leveled against him — do suggest one of the more profound ironies of the “Me Too” movement that is swallowing powerful men.

Trump’s recorded voice has him boasting to a TV host about his grabbing women by their genitals. He boasted about how his celebrity status enabled him to kiss women whenever he felt like it. He has talked about how he was able to walk in on half-dressed beauty pageant contestants because, by golly, he was the boss.

Trump’s “punishment”? He was elected president of the United States. The election does not absolve him of anything. Instead it brings it all into sharp relief when juxtaposed with the allegations that have forced other politicians to walk away from their public service jobs.

I’m not prescient enough to know where this “Me Too” movement is going from here. Perhaps it will gather even more steam. It well might explode inside the Oval Office. Or … it might fizzle and die.

If it does expand and if it does reach even more deeply into the president’s personal behavior, well … then I believe we need to take these resignation suggestions from Sens. Sanders, Booker and Merkley quite seriously.

So, too, should the president.

One thought on “As long as we’re insisting on resignation …”