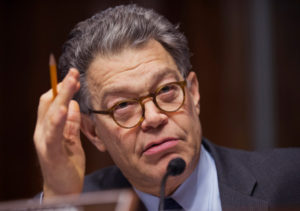 The late “Dandy Don” Meredith, the former Dallas Cowboys quarterback and football commentator, was fond of singing “turn out the lights, the party’s over” when a pro football team was blowing another one out on national TV.

Um, U.S. Sen. Al Franken? The party appears to be over.

More women have come forward to accuse the Minnesota Democrat of groping and unwanted kissing. Droves of Democratic senators now are singing the same chorus: Franken has to quit.

It sounds to me as though the party is over.

Senators turn on one of their own

Let’s all understand something here. There have been no criminal charges filed against Franken. This is purely a political matter. There’s an element of “due process” to follow, but it’s not nearly as critical as it would be if there was criminality involved.

The process is supposed to include an ethics investigation by a Senate committee charged with looking at these matters.

But just as Rep. John Conyers was damaged beyond repair over the allegations that took him out of office, the same appears to be said of Franken.

If his fellow Democrats are turning on him in this fashion, Franken cannot possibly continue to serve in the Senate.

So much for a 2020 presidential campaign, eh?