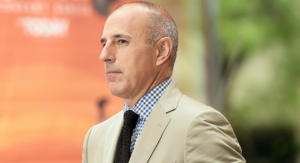 Leave it to Donald John “Fake News Conspirator in Chief” Trump to say precisely the wrong thing in the wake of a growing scandal involving men who have been accused of mistreating women.

How does the president respond? With a tweet, of course: “Wow, Matt Lauer was just fired from NBC for ‘inappropriate sexual behavior in the workplace,” he wrote on Twitter. “But when will the top executives at NBC & Comcast be fired for putting out so much Fake News. Check out Andy Lack’s past!”

Lack is the president of NBC News and the man who announced Lauer’s firing this morning prior to “Today” going on the air.

Trump’s obsession with what he calls “fake news” would be laughable, were it not that the president himself is the No. 1 purveyor of outright lies and phony conspiracies.

Of course, the president isn’t going to offer any kind of cogent comment on the issue that took Lauer down, given his own problems in that regard.

Thus, he is left to blather about something that has no connection to reality.