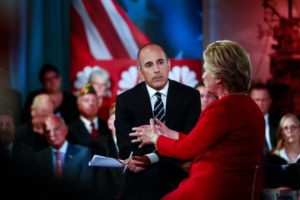 My mind is officially boggled.

I awoke this morning, looked at my social media news feed and saw that NBC fired “Today” co-host Matt Lauer for “inappropriate sexual conduct.” It didn’t end with that stunning announcement.

Later today, I saw that NPR icon Garrison Keillor also has been let go by the public radio network for, um, similar conduct.

This is getting even more stunning than it was before.

NBC went straight for the throat in canning Lauer. The network didn’t wait for any further substantiation of the allegation that came from a network colleague. At this moment, I don’t even know the particulars of what the woman accused Lauer of doing to her.

The network acted immediately on hearing what I am going to presume it believes was a credible accusation.

Network news icons are falling like tall timber. Bill O’Reilly, Charlie Rose, Matt Lauer, Garrison Keillor. Those are just the biggest of the big names. Then we have the likes of Mark Halperin and Glenn Thrush who have lost their jobs over accusations of misbehavior with women.

When is this going to end?

I haven’t even mentioned — until this very minute — the accusations that have sullied the reputations of political leaders. It’s a bipartisan affliction.

I’m beginning to think that employers will need to revamp the applications they ask prospective employees to fill out. Many businesses ask applicants if they’ve ever been convicted of a felony. That’s fine.

They will now likely have to ask: Have you ever committed an act that someone could construe to be sexual harassment … or worse?

This wave of dismissals amid accusations looks for all the world like a purging that needs to occur.