This story kind of slipped past us as we have been fixated on Puerto Rico’s hurricane recovery and assorted troubles afflicting the Donald J. Trump administration.

Major League Baseball has announced a new award it will bestow in honor of one of the greatest men ever to play professional hardball.

The Willie Mays Most Valuable Player Award will go henceforth to the player who earns it while playing in the World Series.

Willie Mays is now 86 years of age. He played in four World Series. His New York Giants won one of them, in 1954, against the Cleveland Indians. During that Series, Mays made “The Catch,” in deep center field off the bat of Indians slugger Vic Wertz.

MLB Commissioner Rob Manfred made the announcement on the 63rd anniversary of that spectacular catch.

Mays crafted an iconic career over more than two decades playing for the Giants — first in New York and then in San Francisco — and for the New York Mets. And just so you know, I got to watch Mays play ball in August 1964. It was in Candlestick Park in San Francisco against the Cincinnati Reds. If memory serves, Mays went hitless that day … but, hey, he’s Willie Mays, man. 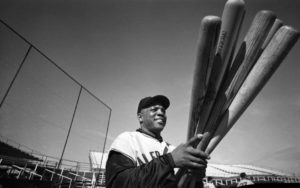 I am glad to see this great athlete’s name placed on an award that will be given in his honor.

Willie Mays could do it all. And he did it with verve, panache and tremendous skill.