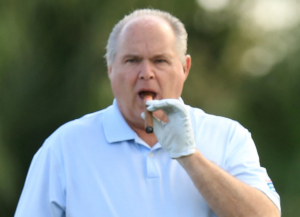 I have decided to no longer refer to Rush “Daddy Dittohead” Limbaugh as a “conservative radio talk-show host.”

He’s certifiably loony. His goofiness goes beyond ideology, whatever his might be.

Limbaugh said this about Hurricane Irma, a Category 5 killer storm that is threatening Puerto Rico, South Florida and the Carolinas:

“Here comes a hurricane, local media goes on the air, ‘Big hurricane coming, oh, my God! Make sure you got batteries. Make sure you got water. It could be the worst ever. Have you seen the size of this baby? It’s already a Cat 5. Oh, my God, oh, my God, it’s bigger than the island of Haiti. Oh, my God.’ People run to the stores, they stock up everything, and they hoard. And they end up with vacant stores, nothing there. And it’s a big success. TV stations got eyeballs, the advertising businesses have sold out of business, gotta restock and the cycle repeats.”

Do you get it? He says Irma is a conspiracy to promote makers of emergency supplies. This storm ain’t a punchline, dude!

Limbaugh has said that these killer storms have been used to promote “liberal agenda” items, such as global warming/climate change. He’s not buying it.

He also said: “You don’t need a hurricane to hit anywhere. All you need is to create the fear and panic accompanied by talk that climate change is causing hurricanes to become more frequent and bigger and more dangerous, and you create the panic, and it’s mission accomplished, agenda advanced.”

Earth to Rush: These storms are causing serious human misery. Millions of Americans on the Gulf Coast are suffering at this very moment. Perhaps millions more Americans will suffer from Hurricane Irma’s savage attack on U.S. territories and on South Florida.

Let’s not minimize the impact of these storms by dismissing worry about future calamities that could be a result of climate change.