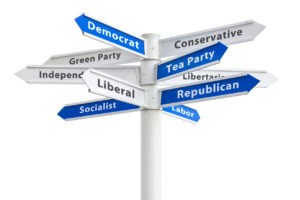 A headline in today’s New York Times caught my attention and gave me a moment’s pause.

It has occurred to me on more than one occasion during the many years I reported and commented on politics wherever I have lived and worked that it makes no sense for municipal candidates to run on partisan tickets.

Why in the world does it matter if a mayor or city council member is a Democrat or a Republican? Someone has to explain to me the validity of forcing these folks to run under the banner of any political party. Do elected municipal officials tend to the needs of constituents based on their party affiliation? They had better not.

I get that NYC is a heavily Democratic city. But if someone calls City Hall with a complaint about, oh, a barking dog or a troublesome pothole or a street light that needs repair, does the city staffer ask the caller whether he or she is a Democrat or Republican?

I realize these are issues to be settled within each community. Sitting out here in Amarillo, Texas, I shouldn’t really care about the politics of New York City. And, in fact, I don’t … not really.

It just sticks in my craw a little bit that some cities in America actually elect municipal officials on partisan ballots.

I prefer the way we do it in Amarillo, or in Beaumont, where we lived for a time before moving to the Panhandle, or in Portland, Ore., the city of my birth. They all elect their governing officials on non-partisan ballots.

I remember one year in Amarillo when a challenger to the incumbent mayor sought to urge “good Republicans” to vote for her. We slapped her down hard at the Amarillo Globe-News, where I worked as editorial page editor. She lost to the incumbent.

I’ve actually argued that county-wide offices need not be partisan, either. Someone needs to explain to me how a tax assessor-collector, or county clerk, or country treasurer, or district clerk, or a sheriff, or district attorney does his or her job on the basis of what’s “good for the party.”

We seem to elect everyone in Texas. We even elect constables — which in my view is the most useless public office any county can employ. I’ll save that argument for another blog post, though. Even constables, for crying out loud, are elected on partisan ballots.

And don’t even get me started on why we elect judges as Democrats and Republicans. I detest partisan election of judges perhaps most of all, given that so many good men and women are tossed off the bench simply because they belong to the “wrong political party.” It’s happened to stellar Democrats in Texas during the past two or three decades; and it happened to equally stellar Republicans back when Democrats were the party in power.

There. My morning rant against partisan politics is over. Nothing will change. I do feel better, though.