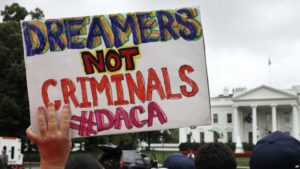 DACA is on the table now for the president of the United States.

Donald Trump should do the right thing and leave it alone. He shouldn’t axe it. He shouldn’t send U.S. residents back to somewhere they’ve never known.

There’s news that Trump is preparing to make a decision on DACA and on whether he’s going to order the expulsion of undocumented immigrants. Don’t do it, Mr. President. It’s not the right thing to do.

DACA covers those who came to this country as children of undocumented immigrants. They were in some cases infants and toddlers. They grew up in the United States. They were educated here. Many of them have grown into responsible adults and have been hired to do important work.

Do we now toss them out because of something their parents did and committed an illegal act over which these children had zero control?

The president is trying to shore up his Republican Party base and a decision to toss out the DACA residents would surely please the 30-percent base of Americans who still endorse Trump’s agenda.

Trump campaigned for the presidency pledging to toss aside DACA. He calls it “amnesty” for illegal immigrants. It is no such thing. DACA gives these individuals a path to citizenship or to achieve legal immigrant status. That’s it.

Maybe he should ask his secretary of energy, Rick Perry, the former governor of Texas who has supported allowing these residents to remain in the United States. Indeed, Perry knows the impact that these individuals have on a state’s economy and the value they bring to society as responsible adults. Perry’s support of DACA echoes the belief of another former Texas governor, former President George W. Bush.

There’s also another political calculation that Trump needs to ponder. He continues to poll miserably among Hispanic Americans. To be candid, I don’t give a damn if he finds a way to please that demographic group. If he does take that into account and he scraps the notion of tossing out these U.S. residents — these de facto Americans — he’ll do far more than please a voting demographic he needs while angering the “base” that’s been with him all along.

The president would be doing the right thing.