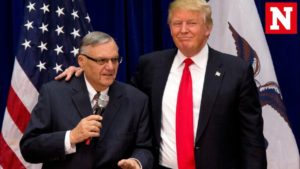 I have refrained from criticizing the editorial positions taken by the newspaper where my journalism career ended … but I’m going to make a brief exception here.

The Amarillo Globe-News published an editorial this week that questions the outrage expressed over the presidential pardon of former “Sheriff Joe” Arpaio. The editorial missed the mark on two important points.

First point: The AGN refers to the “alleged” crime for which Arpaio was convicted. Others have said as much already, but there’s no “alleged” or “allegedly” about it.

Arpaio was found guilty by a U.S. District judge of disobeying a lawful court order, which prohibited him from continuing his roundup of individuals he suspected of being illegal immigrants. He was waiting to be sentenced for his contempt of court conviction when Donald J. Trump intervened late this past week with his full and unconditional pardon of the former sheriff.

Furthermore, the former Maricopa County, Ariz., sheriff’s acceptance of the pardon confirms his guilt — as if it needed confirmation.

Second point: This gets more to the crux of the editorial’s misplaced ire. The AGN suggests that the judge’s ruling was dictated more by politics than the application of the law. U.S. District Judge Susan Bolton, the AGN notes, was appointed in 2000 by former President Bill Clinton. She’s a Democratic appointee; Arpaio is a Republican. Do you get it? Bolton’s decision was based on political considerations, according to the AGN. I guess I could suggest, too, that the Senate that confirmed Bolton was dominated by Republicans.

Let’s hold on here. The U.S. Constitution allows the president to make appointments to the federal judiciary. It makes no mention of partisan consideration. A judge who gets a presidential nod then is approved by the U.S. Senate. Then that judge is empowered fully to implement the law.

What the AGN has done with this argument is impugn the integrity of the federal judiciary, which is precisely what the president of the United States has done when the courts have ruled against him on other matters. He referred to a federal jurist in Washington state as a “so-called judge” when he struck down the president’s ban on Muslims traveling to the United States. He has questioned whether another federal judge could adjudicate a case involving Trump University because “he’s a Mexican.”

The AGN is now traipsing down that that dangerous path.

I don’t care if Jabba the Hut appoints federal judges. If they are qualified to serve and if the U.S. Senate signs off on the appointment, then they are given the full weight of the Constitution to do their job.

Check out the AGN editorial here.

I’ve said my piece about it. You can make up your own mind. I’m out.