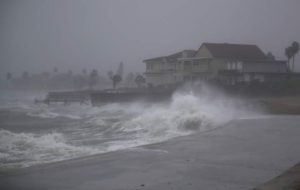 Hurricane Harvey has been “downgraded” to a tropical storm. The beast delivered its havoc to Houston and is still punishing the nation’s fourth-largest city.

Then it decided to back up, move out over the Gulf of Mexico and pick up some more moisture from the overheated body of water. Now the storm is coming back ashore. Where it makes landfall again remains mostly a guess. It’ll be somewhere east of Houston. Possibly near Beaumont, where my family and I lived for nearly 11 years before moving to higher ground in the Texas Panhandle.

What are we to glean from this mayhem, this madness, the utter terror of our friends, neighbors and loved ones having to endure this wrath?

I am going to maintain faith that our fellow Texans are going to show the kind of strength and resolve they usually exhibit in times of terrible distress.

When the acclaimed PBS series on the Dust Bowl aired a couple of years ago, I learned a lot about the steel that runs up the spines of Texas Panhandle residents who survived that terrible time. The series, titled “The Dust Bowl,” recounted the horror that those survivors felt as they watched the ground beneath them blow away. They were children then. Now, quite obviously, they are much older — but their recollections were vivid and so very moving.

Through it all many of them stayed. They fought through the disaster. They rebuilt their lives.

Those earlier Texans have produced generations just like them today and those among us in real time in this moment are enduring another tragedy, brought by another form of nature’s rage.

The storm named Harvey is coming back in. It’s going to do more damage. That’s the terrible news. There can be no “blessing” to derive from this.

However, I anticipate that even after Harvey finishes its terrible task that our Gulf Coast brethren will find a way to rebuild their shattered lives.

God bless them all.