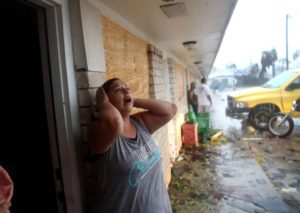 I’m having what I guess you could call a 9/11 Moment as I watch the heartache associated with the cataclysmic flooding throughout Southeast Texas.

Over the years since 9/11 it has become harder for me to watch the Twin Towers collapse. Or to watch the jetliners fly into them.

It’s taken a fraction of the time for me to shudder at the sight of the flooding in Houston and in Beaumont. You see, I have this connection with that part of the world.

My family and I moved to Beaumont in 1984. I had taken a job as an editorial writer at the Beaumont Enterprise and my boss at the time me I would be sitting “in the catbird seat” in the midst of a great “news town.” He was right.

We stayed there for nearly 11 years. My sons graduated from high school and went off to college before my wife and I pulled up stakes and left Beaumont for Amarillo in early 1995.

I learned a couple of things about the Texas Gulf Coast rather quickly.

One is that it rains a lot there. We occasionally would get about 6 or 7 inches of rain in the span of about, oh, an hour. It would produce local flooding. Storm ditches would fill up and the water would run into ponds built for the purpose of holding rain water.

I also learned that the water table along the Gulf Coast is not far at all below Earth’s surface. I don’t know the precise measurement, but I became aware that it takes virtually no time at all for water to fill the spongy, goopy soil throughout the region.

All that is worth mentioning as we watch the horror that continues to play out in Houston and in the Golden Triangle today. Those folks are receiving epic amounts of water. Fifty inches are expected to fall on the region by the middle of the week.

I look at the video on TV and wonder: Where in the world is that water going to go? How long will it take to recede? How does that much rain water recede in a region that (a) sits only about 30 feet above sea level and (b) is as flat as it can possibly get? The Gulf of Mexico only is about 20 miles south of Beaumont; I believe Houston is a little farther inland, but not much.

The misery that is unfolding down yonder is far from over … and it is shattering my heart in a way it hasn’t been broken since 9/11.