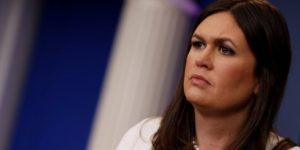 The president was “making a joke,” Sanders said.

Oh, now I get it. Why didn’t I realize it in the moment when the president told cops in Long Island, N.Y., that they shouldn’t have to presume that criminal suspects are innocent until a court proves them guilty?

I know why it didn’t dawn on me — or on police chiefs across the nation. It’s because no one took it as a joke. They took it as a statement of principle from Trump. They issued statements individually and collectively that police shouldn’t rough up criminal suspects; they also condemned the president’s statements on the subject.

They are sensitive to police relations with the communities they serve, owing to repeated incidents of police-involved shootings in connection with the deaths of African-Americans.

But, hey! He was joking, said press secretary Sanders.

“I believe he was making a joke at the time,” Sanders said during today’s White House press briefing.

Actually, the president did make a reasonable call for the end to the notorious gang MS-13, in his remarks to police in Suffolk County, N.Y. Then he twisted off into this rough-’em-up rhetoric.

“When you see these towns and when you see these thugs being thrown into the paddy wagon, you just see them thrown in. Rough, I said. Please don’t be too nice,” Trump said. “Like when you guys put somebody in the car and you’re protecting their head, you know? The way you put their hand over. Like, don’t hit their head, and they’ve just killed somebody? Don’t hit their head? I said, ‘You can take the hand away, OK?’”

Nice try, Sarah Sanders. You might “believe” the president was joking. Many of the rest of us — including the men and women who lead local police agencies — don’t see it that way.