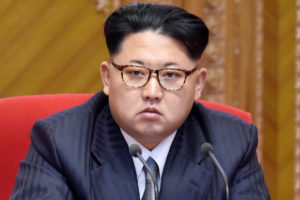 Now that the North Koreans have demonstrated — apparently — that they have a intercontinental ballistic missile capable of packing a nuclear warhead, it is good to ponder something about the boy with the bad haircut who runs that country.

Does Kim Jong Un have a death wish? Does he really and truly wish for this country to be destroyed in a full retaliatory strike by the world’s most powerful nation? Does the dictator really believe he can bully the United States of America with threats of a nuclear missile strike on major West Coast cities?

I keep coming with “no” on all counts?

Please do not misconstrue me on this. I am not dismissing any threat that this fruitcake dictator poses to South Korea, or Japan, or to the U.S. of A. Any dictator who is capable of allowing his people to starve while building a formidable military apparatus is capable, I suppose, of anything.

There are times, though, when it’s tempting to try to insert oneself into the skull of someone else. I try to do that on occasion with this clown. He blusters, boasts and bellows about how he intends to react whenever the United States conducts military drills with South Korea. But we keep performing these exercises. And nothing happens. We get no response from North Korea.

I suppose this is my of suggesting that a pre-emptive military strike against North Korea is likely the worst of a series of bad options facing the U.S. commander in chief.

Donald Trump once referred to Kim Jong Un as a “smart cookie.” Let’s take the president at his word, then, that this fellow is able to discern political reality when it stares him in the face.

Here’s one of those reality-based factors: Any missile fired at the United States of America or at South Korea is virtually guaranteed to provoke a response from this country that will destroy North Korea.

Does the North Korean tinhorn really and truly want that to happen?