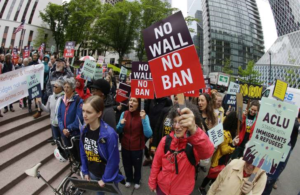 The notion of banning people from entering this nation because they come from places where most citizens practice a certain religion remains repugnant to me.

The United States of America is supposed to stand for a principle that welcomes all citizens of the world. That’s no longer the case.

Donald J. Trump’s ban on folks coming from six Muslim-majority nations has been kinda/sorta restored by the U.S. Supreme Court, which today issued a 6-3 ruling to back the president. Today’s ruling overturns a lower court decision that threw out the ban on the basis that it discriminates against people because of their religion.

What does it mean? I guess it bans anyone who comes here who lacks any “bona fide relationship with a person or entity in the United States.”

Others can come in, according to the court.

My question remains the same: Will any of this make us safer against international terrorists? I do not believe that’s the case.

Nothing in the president’s initiative prevents U.S. citizens from committing acts of terror. The U.S. Army psychiatrist who killed those folks at Fort Hood in November 2009 is an American, to cite just one example.

I continue to cling to the notion that “extreme vetting,” which the president also has called for, isn’t a bad thing by itself. Indeed, U.S. customs and immigration officials need to do better at ensuring at points of entry that everyone coming here does not pose a threat; they’re doing that already.

Today’s ruling only settles it temporarily. The court’s next term begins in October and the justices will take it up fully then.

Score one for the president, though. He got a ruling he can live with, even though it won’t do a thing to make us safer against those who would harm us.