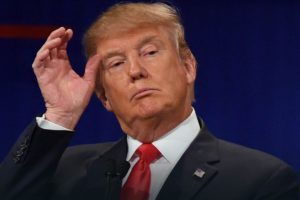 Donald J. Trump, 45th president of the United States, made what sounded — to my ears at least — like a confirmation over the weekend of what many of his critics have been saying since he began running for the office to which he was elected.

He seems to have acknowledged that he doesn’t have any principles. He lacks any core beliefs for which he would stand and fight.

When pressed by CBS News’s John Dickerson on “Face the Nation,” Trump blurted out that “I don’t stand by anything.”

Well. There you go.

Dickerson sought to press the president on the unfounded allegation he leveled that President Barack Obama wiretapped his campaign office. Trump declined to answer — and then he ended the interview.

The president’s remarkable acknowledgment came amid a flurry of media interviews that included untold numbers of bizarre assertions that demonstrated a number of qualities about this man: He knows next to nothing about U.S. history, about the government over which he presides and about the world through which he must navigate.

I keep coming back to the “I don’t stand by anything” statement.

Oh, man. That speaks volumes to me. What it means, I believe, is that anything that flies out of his mouth is fair game in the moment. It means that we have an unprincipled carnival barker sitting behind that big Oval Office desk and in the Situation Room. He is making decisions based on whatever someone tells him in real time and that he will not stand for anyone seeking to hold him accountable for anything he has said previously.

Hillary won the popular vote because of illegal ballots? Obama wiretapped his campaign office? Kim Jong Un is a “smart cookie”? John McCain is a war hero only “because he was captured”? Barack Obama is an illegal alien who wasn’t qualified to run for president? The media are “the enemy of the American people”?

Does he believe this horse manure? Or does he just say it because he has this insatiable desire to stir things up?

Donald Trump has just settled a serious talking point at only the 102nd day as president. He has just admitted that he is an unprincipled charlatan.