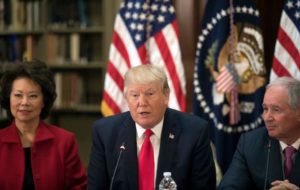 It took a good while — too long, in fact — but it appears the Donald Trump-Vladimir Putin bromance might be on the verge of ending.

The White House has issued a stern statement accusing Russia of covering up the Syrian chemical weapons attack that killed several dozen civilians, including children. The gassing of Syrian civilians prompted the U.S. air strike that wiped out several Russian-made Syrian jet fighters at the base from where the gas attack was launched.

The strongly worded statement demands international condemnation of Syria for using the chemical weapons and accuses Russia of “shielding” its Syrian allies.

As the New York Times reported: “It marks a striking shift by President Trump, who entered office praising President Vladimir V. Putin of Russia and seeking common ground with him — and now appears to be moving swiftly to isolate him. The charges came as Rex W. Tillerson, the secretary of state, was preparing for meetings in Moscow on Wednesday, and as Congress and the F.B.I. are investigating potential ties between Mr. Trump’s presidential campaign and Russia.”

Has the president finally gotten the message that Vladimir Putin is no friend of the United States and shouldn’t be a friend of the man who now governs this country?

As for the investigation that’s under way regarding the Trump campaign’s ties to Russia, let it continue full throttle.

The here and now, though, presents a whole new and different set of challenges that must require an end to the strange buddy relationship between Donald Trump and Vladimir Putin.