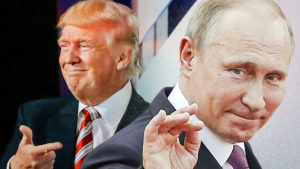 Secretary of State Rex Tillerson also speaks wisely of the U.S. effort to rid the world of the Islamic State in Syria.

World leaders are applauding the president for launching the air strikes that hit military targets … even though the result of those strikes hasn’t dealt anything close to a crippling blow to Syria’s military capability.

I am waiting with bated breath for the president to hurl some angry public rhetoric at Assad’s benefactor, Russian President/goon Vladimir Putin. U.N. Ambassador Nikki Haley at least has spoken about the Russian role in financing the Syrian government’s efforts to put down forces that have risen against the tyrannical Assad.

The president, however, needs to speak for the United States of America in condemning Russia’s complicity in the use of lethal gas by Assad’s forces against defenseless civilians. Dozens of people died in that horrifying attack, including several children. To witness the agony of those afflicted by the gas is to witness a major crime against humanity.

Assad must share most of the blame. But not all of it.

Russian military personnel have been actively engaged in this monstrous activity for years. They answer to Donald Trump’s pal Putin.

My patience is wearing out waiting for Trump to speak as forcefully about Vlad as he has about Assad.