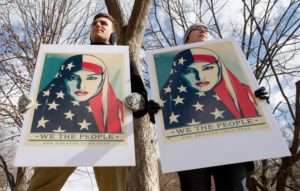 It’s back to the drawing board, or perhaps to another piece of scratch paper, for Donald J. Trump’s effort to ban Muslims from entering the United States of America.

The judge, based in Hawaii, ruled that Trump’s revised ban is just as discriminatory against people of a certain faith as his first ban. Thus, said the judge, the president is violating the U.S. Constitution.

What’s next? The case is likely to return to the 9th Circuit Court of Appeals, which upheld an earlier ruling by another federal judge that struck down Trump’s initial refugee.

The president had a response, according to National Public Radio: Trump, speaking at a rally in Nashville, Tenn., called the restraining order “unprecedented judicial overreach.” He said, “The law and the Constitution give the president the power to suspend immigration — when he deems — or she, fortunately it will not be Hillary, ‘she’ — when he or she deems it to be in the national interests of our country.”

Trump sought to soften the ban by removing Iraq from his list of banned countries. He also removed the word “Muslim” from the new order. That wasn’t good enough, according to Judge Watson, who said the order still singles out Muslims, which he said is discriminatory on its face.

Watson then ticked off a long list of anti-Muslim statements Trump made while campaigning for president and while he has served as president.

Those of us who thought the new order was better than the first one, but who remain opposed to the policy itself, are heartened by the judge’s decision.

I have an idea for the president to consider. Yes, he’s concerned about protecting Americans from international terrorists. I get it and I endorse his concern. But Mr. President, why not just instruct our federal security authorities to be hyper-vigilant at every entry point?

That’ll protect us, too.