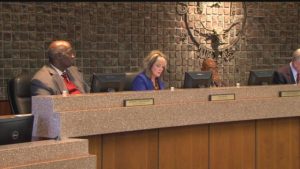 So, the Jared Miller era at Amarillo City Hall is off to a rousing start.

The City Council has voted unanimously to hire Miller as the next city manager. I am heartened by this news. I do not harbor concerns that the new manager has nowhere to go but down after this.

It’s been a rocky time at City Hall. Two city managers have quit under duress. The first one to go, Jarrett Atkinson, couldn’t work with the new council majority; the second one to split, interim manager Terry Childers, couldn’t control his big mouth and resigned after cursing at a constituent.

I’m going to hope now for a smooth transition — which is kind of in the news these days, you know — as Miller gets set to grasp the reins of municipal government.

City Hall is in dire need of some stability.

Not only did Atkinson quit, but a number of key senior staffers bailed about the same time. The city attorney resigned and an assistant city manager retired. A new council member called for the Amarillo Economic Development Corporation board to quit. The interim city manager realigned downtown development operations and moved many of the AEDC functions into City Hall departments.

I guess the concern Miller needs to address is how he’s going to calm the occasionally stormy waters at City Hall. I take heart in the unanimous vote by the council, which hasn’t always spoken with a single voice since this council bunch took office in the spring of 2015. The manager needs to know he has council support for the big job that awaits him as he moves from San Marcos to Amarillo.

One more point about the council vote: I am glad that this council acted quickly, rather than waiting — as some have advocated — for the next election. The Amarillo Globe-News editorialized in favor of the council waiting until after the May 6 council election, apparently thinking that a potential wholesale turnover among council members could produce a set of councilors with vastly different priorities.

Nuts! The city charter empowers the current council to act. It chose to move forward. Besides, with just a two-year gap between elections, there’s never a perfect time for an Amarillo City Council to make such a critical hiring decision.

Here we go. The new city manager has unanimous support among the folks who hired him. Let’s get busy, Mr. Manager.