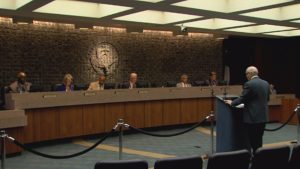 The pace is picking up in this election contest for the Amarillo City Council.

Freda Powell has announced her candidacy for the council. She’s a known civic leader, who’s been engaged in matters of public policy for many years.

Mayor Paul Harpole is expected to announce today whether he’ll seek another term. My bet? He’s bowing out. We’re also expected to hear from Place 2 Councilwoman Lisa Blake about whether she plans to run for election to the seat to which she was appointed in 2016 to succeed Brian Eades, who resigned and moved out of town.

This is all quite exciting and it bodes well for the city’s experiment in representative democracy.

I’ve said for years that our system of government — especially at the local level — works best when more, rather than fewer, people get involved. It works best when many candidates step up and voters then get a chance to assess their qualities, their message and their intent.

An even better result is when more, rather than fewer, voters actually go to the polls on Election Day.

As I noted many times while I wrote editorials and columns for newspapers in Texas and Oregon, city hall and the county courthouse is where government’s proverbial rubber hits the road. I’ll make the point again here.

Pundits and political scientists all gauge the level of interest in presidential elections by the turnout. The 2016 contest between Donald Trump and Hillary Clinton featured a so-so percentage turnout of eligible voters who actually cast ballots. Why? It’s likely because of the high negative poll ratings both candidates had to bear.

We measure turnout success quite differently at the local level. A turnout of 20 to 30 percent for municipal races in Amarillo is considered a smashing success. I consider it a dismal failure of voters to engage in the policies that have a direct impact on their lives.

We are choosing individuals who will set tax rates and will determine how many cops and firefighters will protect us; they decide on whether our streets should be well-maintained; they determine the cost of our water and sewer service; they vote on whether to improve our parks.

This stuff matters, folks, in a very real, tangible and demonstrable way to all of us.

So … The candidates are lining up to run for City Council. The deadline for filing is Feb. 17. The election occurs on May 6.

We’ve had profoundly important elections before. They have produced dramatic turnover, such as what occurred in the May 2015 election.

My hope now is that as the quality of the field continues to improve along with the quantity that voters, too, will step up and do their civic duty and participate.