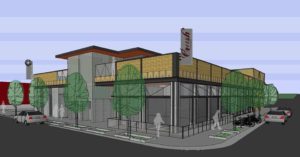 Some interesting news is coming forth about downtown Amarillo’s future … which coincides nicely with the City Council’s decision to hire a new city manager.

The two things aren’t necessarily related directly, but City Hall’s new top hand — Jared Miller — is going to oversee a development that holds tremendous potential for the city he is about to manage.

They’ve broken ground on a new restaurant at the corner of Seventh Avenue and Polk Street. An established eatery, Crush, is moving across the street.

What does this mean? From what I understand, it moves forward the development of what’s been called in recent days a new “dining district” for the city’s downtown area.

We’ve got that brew pub being developed nearby. We’ll see another new structure going in with a couple of other dining establishments also in the immediate area. Napoli’s does business at the corner of Seventh and Taylor.

All the while, work on the Embassy Suites hotel is ongoing next to the parking garage.

What appears to be taking shape, as I see it, is a fundamental remaking of Amarillo’s downtown personality.

My wife and I arrived here in early 1995. To be candid, the downtown district didn’t have any kind of identity that either of us could recognize. Polk Street was in a moribund state. The Santa Fe Building sat empty at the corner of Ninth and Polk; that structure’s fortunes changed dramatically later that year when Potter County purchased it for a song and rehabbed it into a first-class office complex.

Now, though, the city is going through an extreme makeover.

Think of it: Embassy Suites will open soon; Xcel Energy is finishing work on its new office complex; that parking garage will open as well; West Texas A&M University is tearing the daylights out of the old Commerce Building to transform it into a new downtown Amarillo campus; this new dining district is now beginning to take some form.

Oh, and we’ve also cleared out the former Coca-Cola distribution center to make room for a ballpark that many of us want to see built eventually.

It’s not all entirely peachy. Many floors in the 31-story Chase Tower are going dark when Xcel and WT vacate the skyscraper. But I understand that the leasing agents working to re-fill those floors remain highly optimistic that the building will get new life.

The pace of change is a bit mind-boggling. I am prepared to keep watching — and waiting — for it all to bear fruit for the city.