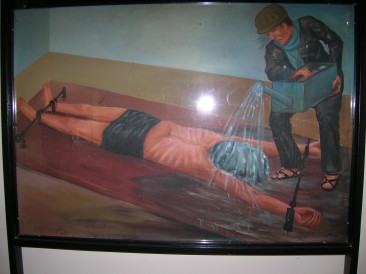 I have visited a torture chamber.

It’s in Phnom Penh, Cambodia. It’s called Tuol Sleng, or S-21. The Khmer Rouge used this former school as a place to torture people into giving them information. Once they tortured them, they killed them and buried them in killing fields scattered throughout the country. I’ve been to one of those killing fields twice (in 1989 and 2004), at Choeng Ek, on the outskirts of Cambodia’s capital city.

One of the more commonly used torture methods was a then little-known tactic called “waterboarding.” The Khmer Rouge goons would drench the captives’ heads in water, giving them a sense of drowning — and then stop. Then they would do it again. And again.

The Cambodians all called the technique torture. A tribunal right now is trying one of the late Pol Pot’s henchmen for crimes against humanity. One of the crimes was the use of waterboarding as a torture technique against helpless Cambodians.

Many in this country consider waterboarding an acceptable method collecting information from “enemy combatants.” Then-President Bush declared that “this country does not torture.” But it did waterboard people in U.S. custody.

From what I’ve seen at that torture chamber on the other side of the world, waterboarding is a torture device. It is a hideous, ghastly method of interrogation that goes far beyond your run-of-the-mill sleep deprivation and smoke-filled room with a swinging light bulb hanging from a ceiling.

This country is better than that.