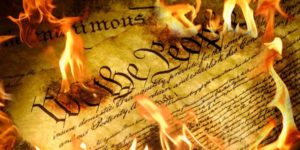 Donald J. Trump’s propensity for popping off on social media came into amazing, sharp focus with his latest rant about flag burning.

And it demonstrates why the president-elect’s on-the-job training for the office he is about to assume is so troubling to many of us … who didn’t vote for him.

Trump went on another Twitter tirade and said that those who burn the flag out of protest should spend time in the clink and possibly lose their citizenship.

This goonish statement underscores as well as anything he’s muttered or sputtered during the course of his fledgling political career how — in a normal election year — he wouldn’t have won the presidency.

His ridiculous assertion ignores — willfully? — that the U.S. Supreme Court has ruled time and again that flag-burning is a protected form of political speech. The First Amendment is pretty damn clear about it and anyone who has read that amendment ought to know it — and that makes me believe beyond a doubt that Trump has no clue as to what’s contained in the nation’s governing document.

It puzzles me to the max — even now, weeks after the election — just how this happened. Still, I accept the result, as distasteful as it is to my political palate.

I cannot help but wonder, though, how many more idiotic pronouncements the president-elect is going to make. How much more consternation is he going to cause with his utter ignorance of something so fundamental as freedom of speech and political expression?

I’ll repeat what I’ve said before and what others have said already: We have elected a dangerous man as our next president.