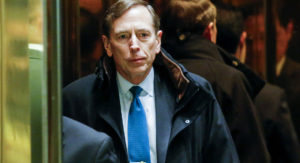 Donald J. Trump said Hillary Clinton should be in jail over the way she used a personal e-mail server. Now he’s considering a retired Army general for secretary of state who actually pleaded guilty to mishandling information and lying about it to federal investigators?

David Petraeus is being considered for the State job.

He’s a dedicated and highly decorated retired military officer. He served his country with great distinction. However, he got caught doing something he shouldn’t have done and then admitted to doing it.

Does the president-elect look the other way as it regards the general while insisting that his former campaign opponent should have been locked up?

As Politico reports: “The very consideration of Petraeus for a senior position reveals that the Trump campaign’s rhetoric regarding Hillary Clinton was totally bogus,” said Steven Aftergood, a specialist on government classification at the Federation of American Scientists. “Candidate Trump was generating hysteria over Clinton’s handling or mishandling of classified information that he likely never believed or took seriously.”

What am I missing?