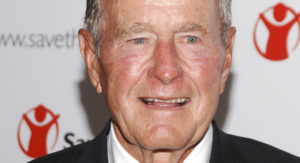 This probably isn’t nearly as spectacular a political story as some are making it out to be.

Still, it’s an important development in the presidential campaign of 2016.

The person who “outed” Bush 41 happens to be Kathleen Kennedy Townsend, a former Democratic lieutenant governor of Maryland — and the eldest child of the late Robert F. Kennedy.

Sure, it’s an important story. President Bush is as “establishment Republican” as you can get. He served in many high-profile government capacities before being elected president in 1988. Now he’s going to vote for the wife of the man who defeated him for re-election in 1992. Bush’s forsaking of Trump’s candidacy speaks to the reluctance among many Republicans to back their party’s nominee.

But hold on. Is this a jaw-dropper? Hardly.

President Bush is a dedicated family man who loves his children more than life itself. When a politician attacks the kids, as Trump did this year en route to the GOP nomination, it’s only natural for Dad to take it personally.

Trump called former Florida Gov. Jeb Bush “Low Energy Jeb” and chided him repeatedly for his failure to do better against Trump in the GOP primary campaign.

Then there is this: Trump said the younger President Bush — George W. — “lied” the country into going to war in Iraq. He accused W. of fabricating the pretext for taking out Saddam Hussein by saying he had “weapons of mass destruction” and that he was complicit in the 9/11 attacks.

Setting aside whether one believes Trump’s assertions about W.’s veracity — and they do ring true to me — it’s totally understandable that the first President Bush would hold those utterances against the man who made them.

With 49 days to go before the election, it remains to be seen whether Poppy’s plan to vote for Hillary will bring other disaffected establishment Republicans along.

As for George H.W. Bush’s apparent defection … I do get it.