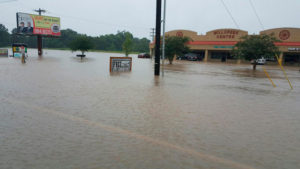 I am one of those who believes Barack Obama should take day away from his vacation to do something quite presidential.

He ought to take a jet ride south from Martha’s Vineyard, Mass., to tour the flood damage of Louisiana. He ought to spend just a bit of time talking to local residents, local officials, state officials and his Homeland Security staff to get an up-close look at Mother Nature’s fury.

Louisiana Gov. John Bel Edwards has said he’d rather have the president wait before going there.

Look, this isn’t written into the president’s job description. It’s understood, though, that when Americans are hurting their head of state sometimes gets called upon to offer personal words of comfort, love and support.

A historic flood, to my mind, counts as one of those times.

Chris Cillizza of the Washington Post makes an interesting argument that the president famously doesn’t always do things just because they look right.

However, this president did join the amen chorus of critics in 2005 when President Bush staged that noted flyover during in the aftermath of Hurricane Katrina, which wiped out much of New Orleans. The critics all said Bush needed to set foot on the ground and the flyover became something of a symbol of alleged presidential nonchalance about the suffering that befell one of America’s great cities.

Cillizza writes: “Presidents don’t get vacations — they just get a change of scenery,” Nancy Reagan famously told critics of her husband’s regular trips to the family’s ranch. Work, especially in this digital age, follows you around.

Presidents, though, assume the role of “comforter in chief.” Obama has performed that role masterfully many times during his two terms in office. Whether he’s embraced family members of those slain in spasms of violence or gone to natural disaster sites — such as when he went to the Jersey Shore after Super Storm Sandy devastated that region — he’s been there.