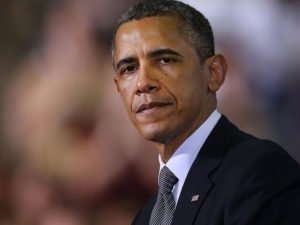 My friends on both sides of the political divide ask me on occasion: How do you cope with living in an area where you are part of a distinct political minority?

It’s easy. I am comfortable in my own skin.

My wife and I moved here in 1995 understanding that we were about to take up residence in what one might consider hostile territory. I knew of the Texas Panhandle’s John Birch Society heritage and of the ardently conservative politics that drove the region upon our arrival and which continues to this very day.

I knew immediately I wasn’t about to change anyone’s mind.

I trust my neighbors understood as well they weren’t about to change mine.

With all that laid out there, I remain perplexed, to say the least, at the “anger” of many Americans at the direction the country is heading.

A blog post notes that the writer of the essay is offering thanks to President Obama “on behalf of an ungrateful nation” for the job he has done for nearly eight years. Here’s the post:

That’s what I’m feeling today as I watch individuals such as Donald J. Trump painting this dark and forbidding picture of the state of play these days.

Perhaps the most fascinating public opinion survey statistic out there is that so-called “right track/wrong track” question pollsters keep asking Americans. They get a 70 percent “wrong track” response.

I keep wondering if it includes those who think the country hasn’t veered far enough to the left along with those who want it to lean hard in the other direction.

We keep hearing those on the right — now led by GOP presidential nominee Trump — repeating the mantra that America is hurtling along on the “wrong track.”

Let me be as clear as I can be: I don’t believe it.

I remember as clearly as everyone else where we were headed when Barack Obama took office in 2009. He decided to take some bold steps to end the economic free fall.

Have they worked as well as everyone would want? No. Those on the fringes of the spectrum say (a) too many Americans aren’t yet earning enough money or (b) the national debt has ballooned too rapidly.

I’ll continue to see this world through my own prism. It’s different than the one used by so many of my neighbors here in the Heart of Republicanism. I get it.

As the essayist writes in the blog attached to this message, thank you, Mr. President, for doing your job well.

2 thoughts on “Getting by in a ‘hostile environment’”