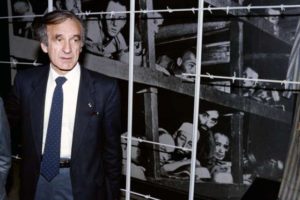 The Nobel Peace Prize citation said it with simple eloquence.

Elie Wiesel, the document stated, had been the “messenger to mankind.”

His message was to alert the world of the horror that occurred in Europe prior to and during World War II. The Holocaust became thrust onto the world’s conscience thanks to the Wiesel, who died today at the age of 87.

He was born in what is now Romania and became a captive of the Nazi tyrants who rounded him up and kept him captive in one of the death camps scattered throughout Europe.

That he survived Auschwitz in itself is a miracle. That he found his voice later to bring to light the horror that occurred throughout Europe is his lasting contribution to humankind.

It would be Wiesel who would remind the world of a once-little-known truth. It was that the opposite of “hate” wasn’t “love,” he said. The opposite was “indifference.” Indeed, Wiesel reminded us that “indifference” was the antithesis of many human emotions, such as love and compassion.

He was courageous, scolding President Reagan for touring a cemetery in Bitburg, Germany, where many SS officers are buried. The president should be with the “victims of the SS,” Wiesel said.

President Obama paid tribute today to Wiesel: “He raised his voice, not just against anti-Semitism, but against hatred, bigotry and intolerance in all its forms,” the president said Saturday in a statement. “He implored each of us, as nations and as human beings, to do the same, to see ourselves in each other and to make real that pledge of ‘never again.’”

The world has lost a powerful and eloquence voice against evil.

May this courageous and good man rest in the eternal peace he deserves so richly.