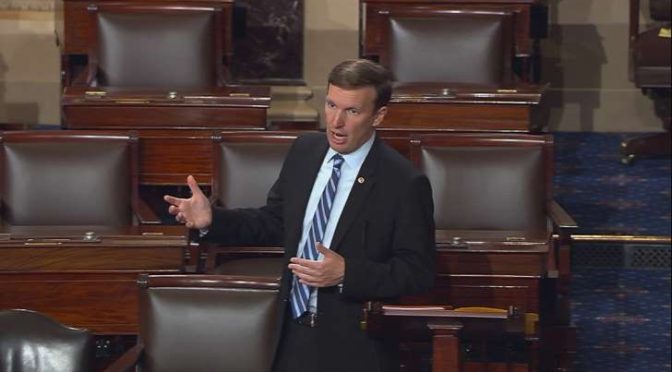 Chris Murphy has declared a form of victory in his effort to enact gun-control legislation.

The junior U.S. senator from Connecticut, though, likely won’t be able to win the proverbial “war” against his colleagues who oppose him.

He spoke for 15 hours on the floor of the Senate, ending his filibuster at 2 a.m. As he yielded the floor to Republicans, he said he received assurance that the Senate will vote on whether to approve expanded background checks and to ban gun sales to suspected terrorists.

I will concede that the background check idea is a bit problematical for the Democratic senator. Opponents of expanding those checks contend that those who buy guns already are subjected to them.

It’s the other one, the terrorist element, that puzzles me.

Congressional Republicans so far have opposed the ban on gun sales to individuals on federal no-fly lists. That’s right. Someone who isn’t allowed to board a commercial airliner because of suspected terrorist affiliation can purchase a gun. Wow, man.

Murphy was moved, obviously, by the slaughter in Orlando, Fla., this past weekend — and by the massacre at Sandy Hook Elementary School four years ago in his home state of Connecticut.

I own two weapons. I understand what the Second Amendment says — I think. I hesitate only because, in my view, the Founders wrote it badly.

Sen. Murphy’s filibuster is supposed to lead now to a Senate vote on these two critical issues: background checks and no-fly list bans.

He isn’t likely to win the day on these votes, given that the Senate is controlled by Republicans who, in turn, appear to be controlled by the gun lobby.

President Barack Obama acknowledged the other day that these measures won’t stop all future acts of gun violence. They might prevent some of them. Isn’t there some value in that?

Let’s put all senators on the record. Do you favor these measures that, in my view, retain the Second Amendment right to gun ownership, or do you oppose them?

3 thoughts on “Filibuster ends; now, let’s go on the record on guns”