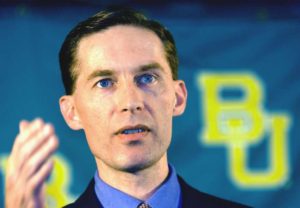 Another head has been lopped off — proverbially, of course — at Baylor University.

This time it belongs to the athletic director, Ian McCaw, who quit in the wake of the sex scandal that already has cost the school its president and its head football coach.

McCaw clearly had to go. He had been put on probation just as Baylor president Ken Starr was getting demoted and head coach Art Briles was put on “suspension” prior to being fired.

Why the shakeup? Oh, just that scandal involving Baylor’s mishandling of the sexual assault charges — and conviction — of football stars. The scandal has roiled the Waco campus and has caused — one should hope — a tremendous re-examination of the way the school handles such cases. In the cases involved in this scandal, the school seemingly sought to sweep them away, hoping no one would notice.

Baylor’s regents issued the usual statement of regret in announcing McCaw’s resignation: “We understand and accept this difficult decision by Ian McCaw to resign as Athletic Director and are grateful for his service to Baylor University. We also appreciate Ian’s commitment and involvement in bringing a person of integrity such as Jim Grobe to the University before making this decision.” Grobe has been named interim head football coach.

Whatever, the regents are seeking to cushion McCaw’s fall.

I don’t wish ill on the former AD, but this fellow ran an athletic department that includes the conduct of its premier revenue-producing sports activity.

As the saying goes, “The fish rots from the head down.”

Baylor University needs to take care of its business.