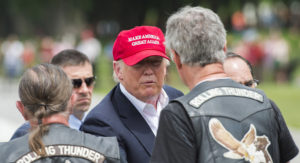 Whatever rhetorical concoction Donald J. Trump is peddling to those who’ve swilled it has been lost on me.

I’m trying to sort through the myriad reasons I detest the Republicans’ presumptive presidential nominee.

I’ve come up with a clear “winner.” It’s that ball cap he wears that bears the message “Make America Great Again.”

You’ve heard the mantra. The United States of America is a loser. Other countries are beating us up on trade. The people who run our government are incompetent. The nation is no longer great. Foreign leaders laugh at us. Our enemies no longer fear us.

Let’s process that for a moment.

Of all the interest groups that Trump has offended with his insults — Hispanics, African-Americans, women, veterans, disabled people — can there be a larger group than, say, the entire nation of 300-plus million citizens?

My wife, brother-in-law and I attended an air show this weekend at Cannon Air Force Base in Clovis, N.M. I realize a single public address announcer doesn’t speak for a nation, but the young man trumpeting the Air Force Thunderbirds aerial team kept referring to the Air Force as the world’s world greatest military force … and that it is part of a larger establishment that contributes to our national greatness.

At every level I can imagine, I consider the United States to be a great nation. As a patriot and a loyal American, I consider my country to be the greatest nation on Earth.

Tell me again: Why isn’t every American offended by the message this guy is peddling?

6 thoughts on “So much to challenge in Trump’s message”