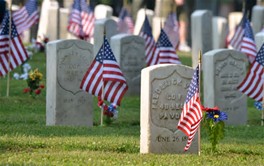 I am gratified at the nation’s coming of age as it relates to our veterans.

We thank them constantly. We offer thanks for their service to the country when we people who know to be vets. We shake the hands of our military personnel when we see them in uniform.

Memorial Day is about to dawn over the nation and once again we’re going to honor those who paid the ultimate price for the freedom we enjoy.

Communities from coast to coast to coast will honor those who paid that price. Amarillo will do just that Monday morning when the city’s mayor, Paul Harpole, a Vietnam War combat veteran, will deliver remarks at the Texas Panhandle War Memorial.

OK, I told you of my gratification at the nation’s coming of age in this regard.

It wasn’t like this just a few decades ago. I had the honor of wearing my country’s uniform for a couple of years from 1968 to 1970. The Army snatched me up and sent me to Vietnam. I came home, resumed my life, got married and have lived a good life with my family.

There was little of the community love being tossed at us when we returned home. No, I didn’t get spit on, or cursed at. But those who died on those distant battlefields weren’t honored the way they are today.

Do not misconstrue these thoughts. I mention them not to express any bitterness. I have none. I mention it to remind us all that sometimes a nation doesn’t always do the right thing by those who serve it.

It’s all changed. For the better. We’ve learned our lesson as a nation. It warms my heart.

The change occurred at the end of the Persian Gulf War in early 1991. You’ll remember it, right? Communities had parades for the returning warriors. We cheered them. We honored those who died.

What’s not always recognized about that resurgence of respect and pride in our military is that those who led those cheers were Vietnam War veterans who had felt a nation’s scorn simply because they did what their country ordered them to do.

I feel only gratitude today when I see the love poured out to those who return and I am moved often to near tears when I see honors given in memory of those who gave their last full measure of devotion in defense of our great nation.

Let’s enjoy the time with our friends and family. While we’re doing so, let’s also honor the memory of those who gave all they had so we could celebrate today.