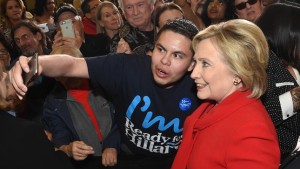 The Hill is reporting a story that seems to define — for me, at least — just how confusing and confounding this election cycle has become.

Hillary Rodham Clinton is trying to enhance her likability. She’s taking selfies with voters and celebrities. Remember when Sen. Barack Obama told her during a 2008 campaign debate that “You’re likable enough, Hillary”? Apparently not this time around.

Do her Democratic primary voters want her to become warm and fuzzy? Do they insist that she show her grandmotherly side more often? I have no clue.

Now, for the Republicans.

Likability isn’t part of the formula that’s propelled Donald J. Trump to the top of the GOP presidential candidate heap.

He’s not likable. Frankly, for my taste, he’s not a lot of things: He’s not presidential; he’s not sophisticated; he’s not grounded in a philosophy other than, say, narcissism.

But there he is. He’s leading South Carolina’s GOP primary polls after threatening to sue Ted Cruz over whether he’s qualified to run for office; after saying President Bush “lied” to get us into the Iraq War; after insulting candidates, a bona fide war hero, disabled people, voters, media types . . . anyone within earshot.

I’m not sure what this might say about any possible differences between Democratic and Republican “base” voters. I hope it doesn’t reveal that Democrats inherently are softer and that Republicans just as inherently love nastiness.

But now I’m beginning to wonder.