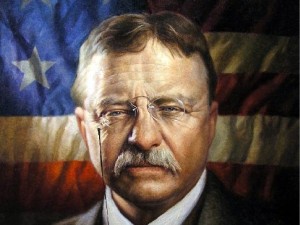 Theodore Roosevelt was not a timid man.

The 26th president of the United States took office as the youngest man ever to ascend to the White House; he was thrust into the office in 1901 when President William McKinley was shot to death.

How did the brash man treat his office? Like he owned it.

I’m reading a book, “The American President,” by historian William E. Leuchtenburg. It examines every presidency of the 20th century — from TR to William Jefferson Clinton.

TR had written a letter to the British historian George Otto Trevelyan near the end of his time in office, according to Leuchtenburg. He wrote:

“While President, I have been president, emphatically; I have used every ounce of power there was in the office and I have not cared a rap for the criticisms of those who spoke of my ‘usurpation of power.’ . . . The efficiency of this government depends upon possessing a strong central executive and wherever I could establish a precedent for strength in the executive, I did.”

Leuchtenburg writes also that Roosevelt boasted after leaving office in 1909 about how things “were done by me without the assistance of Congress.”

Try to imagine the current president — or any recent president, for that matter — bragging about going over the heads of another “co-equal branch of government.”

The 44th president, Barack Obama, has issued some executive orders that have sent his congressional critics into apoplectic shock.

Theodore Roosevelt has, over time, gained stature as one of this country’s greatest leaders. His face is on Mount Rushmore, for crying out loud, right along with Abe Lincoln, Thomas Jefferson and the original George W. — Washington.

How did he get there?

By using the power of his office.