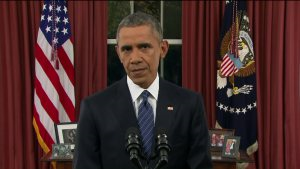 Barack Obama made a number of interesting points today as he laid out his strategy to use his executive authority to reduce gun violence.

One of them dealt with the First Amendment and whether we should treat it as an absolute right. Yes, the president said, we have the right of free speech, but we cannot yell “fire!” in a crowded theater.

We also have the right to religious freedom, but the law prohibits human sacrifice.

The Second Amendment is seen by many in this country as being an absolute right. The men who wrote the constitutional amendment meant that all Americans had the right to “keep and bear arms.”

Sure thing. I, too, have read the amendment and I get it.

I keep asking, though: Aren’t there measures that we can take that regulate the sale of these weapons while protecting the integrity of the Second Amendment? Gun-owner-rights groups — namely the National Rifle Association — keep insisting that the two principles are mutually exclusive. You can’t regulate firearms in any manner without watering down the Second Amendment, they say.

I guess I’ll just have to disagree with such a notion.

President Obama isn’t seeking to “legislate” through executive order, as his critics suggest he’s seeking to do. He has a team of constitutional lawyers who are advising him on what he can do legally. He wants to make it tougher for criminals or mentally disturbed individuals to put their hands on firearms and said today he has no intention of stripping law-abiding Americans of their constitutional right to own a gun.

Doesn’t that goal protect the amendment while trying to make the nation safer from bad guys with guns?