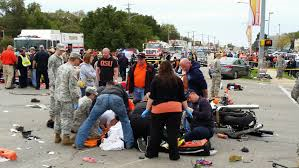 A woman plowed her car into a Stillwater, Okla., crowd over the weekend.

Four people are dead, including a 2-year-old toddler.

The woman reportedly was drunk at the wheel, although the suspect’s lawyer contends there “absolutely” was no alcohol involved. We’ll have to wait for the tests to come back on that one, counselor.

She is now facing at least four counts of second-degree murder over the carnage she created at an Oklahoma State University homecoming parade.

My initial reaction to the charges being filed? Good!

The rage is palpable in Stillwater toward Adacia Chambers, a 25-year-old resident of the city.

These kinds of tragedies hit us all quite hard. The very idea that a crowd of people enjoying a day of celebration for a college football team could be victimized in this manner by someone who might have been impaired by drugs and/or alcohol simply boggles the mind.

It’s not a “mere” drunk- or reckless-driving case here. If Chambers gets convicted of the murder charges, she’s going away for a very long time. What’s more, several of the people who were injured are in critical condition; if any of them loses the fight for survival, the counts against Chambers could add up to even more prison time in the event of a conviction.

One of the witnesses to the mayhem said, “I’ve lived here my whole life and this blows my mind. This is something that doesn’t happen in Stillwater.”

Tragically, yes it does.