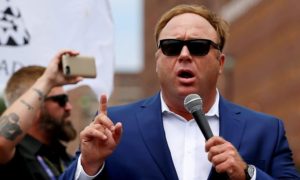 Alex Jones has been kicked off some social media platforms.

I have to offer a huge round of applause for those platforms that have seen fit to abide by the standards they set for those who use them. Jones didn’t do that. He’s gone at least from those particular venues.

Who is this clown? He’s a talk-show blowhard and noted conspiracy theorist. His infamy grew exponentially when he alleged that the Sandy Hook Elementary School massacre in Newtown, Conn. — where 20 first- and second-graders and six teachers were gunned down in 2012 — was a “hoax.” He said the grieving parents were actors brought in by anti-gun activists to carry the cudgel for disarming the American public.

He is a monstrous purveyor of hate speech.

Facebook, Apple, Spotify and YouTube all have banned Jones from using their platforms to spew his garbage.

Jones’s response has been predictable. He says the First Amendment guarantees him the right to speak his mind. No matter how vile his thoughts might be.

This argument reminds me of discussions I had throughout my journalism career with individuals who would submit letters or other commentary that I found unsuitable for publication on the opinion pages I edited.

They would say, “But what about free speech?” My response was the same. “You are free to purchase and run your own newspaper and then you are free to publish whatever you want. We have rules and standards and your submission falls short of them.”

So it is with Alex Jones’s hate speech. The social media platforms are within their own constitutional rights to set standards that those who use them must follow. Jones crossed many lines with his hideous pronouncements.

He’s still able to spew his filth. The U.S. Constitution allows it. He simply is no longer able to do so using the venues whose owners and managers have done what they should have done long ago.

They cut him off. 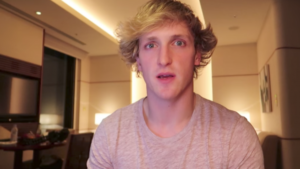 A social media “celebrity” has discovered that his status can carry a gigantic consequence because of thoughtless behavior.

Logan Paul, a young man I’d never heard of before this past week, is now at the center of a social media scandal that threatens to swallow him whole.

He is a YouTube “star” who had the incredibly bad taste to take a picture of a man who had hanged himself in a park in Japan.

Paul has now been scorned around the world for what he did. He took the video, then joked about it. He carried on as he does with the medium, which I understand has earned him a lot of money. His money-earning days might be over. Am I concerned for him? Not in the least.

I haven’t seen the picture he posted on YouTube; it was brought down immediately.

Paul has apologized to his “fans” for his disgusting behavior. He has declared his apology as well to the family of the man he recorded.

I don’t want to comment too much about what he did. Other than to say he has committed a disgusting and disgraceful act.

What is worth a brief comment on this blog, though, is the rise of this “instant celebrity” status that social media often produce. Twitter accounts feature people who post idiotic messages that get a “following” of sort out there in that particular social media sphere. The same can be said of YouTube.

People can become celebrities overnight if they establish a fan base that follows these clowns’ goings-on. Logan Paul is one of those celebs who has enriched himself through the goofy comedy routines he posts on that medium.

I remember a time — pre-social media — when individuals had to demonstrate actual talent to develop the level of following we are seeing these days. I am aware that TV game-show contestants often filled our screens with nutty behavior and utterances.

The ranks of social media celebrities has exploded in recent years. They’re everywhere. They are ubiquitous — and they make lots of money.

What this clown Logan Paul did shows what happens when we laugh out loud at the actions of individuals who don’t have the maturity or the good judgment to handle the status they have attained.

Do you remember a guy named Dylan Ratigan?

He used to have a talk show on MSNBC. He’s not a flaming liberal, which is what conservatives say about MSBNC’s talking heads. He’s more of, um, an equal-opportunity critic. During the financial crisis of late 2008 and early 2009, he coined the term “banksters” to describe the financial geniuses who got the country into the mess it found itself.

Ratigan had his show. Then he was gone.

I’ve been missing the guy ever since.

Well, I recently located a YouTube link with some snippets of Ratigan’s rants. They’re called “The Real Ratigan.”

One of the segments mentions how Donald Trump and Bernie Sanders are the only two of the current crop of presidential candidates who tell us what’s in their hearts and on their minds. They don’t give us “poll-tested talking points.”

He likes that about both men.

I wish Ratigan would be a tad more visible and more in demand as a “contributor” to whichever network is willing to have this guy share his views on politics, policy and the state of affairs in the United States.