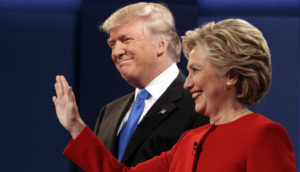 Donald J. Trump has taken credit for a lot of things lately.

* For predicting the terror attack that killed 49 people in an Orlando, Fla., nightclub.

* For persuading President Obama to release his birth certificate that proves he is a “natural-born” U.S. citizen.

* For selecting a running mate, Mike Pence, who did a stellar job while debating Tim Kaine the other night.

* For juicing up the ratings that drew all those viewers to the first debate with Hillary Rodham Clinton.

Well, the Republican presidential nominee can take credit for what’s going to transpire, more than likely, at the next debate, when he and Democratic nominee Clinton square off.

Ladies and gents, we are heading for a serious train wreck of a political spectacle Sunday night — all due to Trump’s hideously lewd comments about women that were caught on a “hot mic” 11 years ago as he was preparing for a cameo appearance on a daytime soap opera.

You’ve heard about it, yes?

Well, the reaction has been ferocious. Many Republican leaders want Trump to drop out of the race; others of them want his running mate, Mike Pence, to bail.

They wanted a full-scale apology from Trump. What they got last night in a 90-second video was as much a threat against Clinton as a mea culpa for saying how he sought to have sex with a married woman, how he wanted to grab another one in her private area, how he was able to have his way with women because he’s a “star.”

Did you see contrition in Trump’s face or hear it in his voice as he delivered that so-called “apology”? I did not.

Now we get to watch Hillary Clinton and Donald Trump field questions from votes in this town hall event in St. Louis. The questions will come not only from moderators Martha Raddatz of ABC News and Anderson Cooper of CNN, but from every-day folks who (a) believe Trump has disqualified himself as a presidential candidate or (b) believe Hillary Clinton needs to answer as well for her husband’s own well-chronicled sexual misbehavior.

The rest of the issues — trade policy, the war on terrorism, the economy, jobs — may be cast aside as Americans tune in to hear Trump seek to defend the indefensible.

Go ahead, Donald. You are more than welcome to take credit for triggering this national debate.

Is this what we can expect from the Donald Trump for president campaign?

More quibbling about things such as a lawyer wanting to take a break from a deposition to feed her baby?

Honestly, I am quite unnerved by this latest kerfuffle.

A lawyer, Elizabeth Beck, was questioning Trump about a real estate deal gone bad. She wanted to take a break to operate a breast pump to feed her infant child. Trump reportedly went ballistic, calling her “disgusting.”

The New York Times reported the 2011 dispute. Trump’s response? Beck supposedly wanted to feed her daughter in front of him, which made him uncomfortable.

So, how are we supposed to react to these kinds of stories involving a man seeking to become leader of the Free World and commander in chief of the world’s greatest military apparatus?

And there’s lots of other issues as well.

This thing with Elizabeth Beck? It likely could speak to how he views women’s issues and women in general, which are important. They seem more appropriate for one of those daytime “talk shows,” rather than issues for discussion in the heat of a presidential campaign.