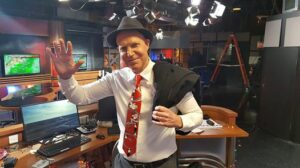 Dave Oliver might not like to be associated with the term “war,” but that’s how I see the next stage of the iconic Amarillo, Texas, TV meteorologist’s life.

The man known throughout the Texas Panhandle as “Doppler Dave” is stepping away from the “green screen” for a while. He is fighting prostate cancer, which he said has been caught in its early stages. The cure rate for early detection of prostate cancer is good, so I want to join his many fans — and believe me, they number in the many thousands — in wishing him a speedy recovery.

Oliver and I are not great friends. I don’t know him well. I only know of him after living in Amarillo for more than 20 years. He has been chief meteorologist for KFDA NewsChannel 10 since before my wife and I moved to Amarillo in early 1995.

For a time, Oliver and I were NewsChannel 10 colleagues. After I left the Amarillo Globe-News in August 2012, I went to work as a freelance blogger for KFDA’s website. I wrote feature stories for the site. One of them involved the use of weather balloons at the National Weather Service station near the city’s international airport. The head weather guy at the NWS station in Amarillo spoke very highly of Oliver’s knowledge of the weather and his professionalism; Oliver spoke highly in return of his NWS colleague.

Oliver brings a sort of down-home folksiness to his broadcasts. It sells greatly in the community he serves. He speaks plainly and, to the best of my knowledge, steers away from meteorologists’ techno-speak we occasionally hear. He manages to tell viewers what the weather is doing without going into a scientific dissertation regarding “hook echoes” and “straight-line wind.”

My wife and I have moved away from the Panhandle. Thankfully, the Internet allows me to stay abreast of goings-on in the city where my wife and I lived for so many years. Dave Oliver’s announcement caught me by surprise.

With that, I want to say, “Get well, ‘Doppler Dave.'” Your legions of fans will await your return to the air.