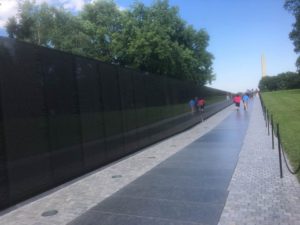 WASHINGTON — This is the most political city in America, if not the world and politics being what it has become in recent decades, this city is full of a lot of hard feelings and recrimination.

You know my own feelings about the current president of the United States. But this blog post isn’t about that — and it damn sure isn’t about him. It’s about the myriad monuments, memorials and assorted structures throughout the city that pay testament to the nation’s greatness.

We came to the Vietnam Veterans Memorial. It’s like an outdoor church. Visitors lower their voices. They speak in solemn tones. They look at the 58,000-plus names etched into the stone, seeking to recall memories of the individuals who gave their last full measure.

I found a name I had spotted the first time my family and I came here in 1990. He was a young man with whom I served briefly in Vietnam. He was set to go home in a few days, but fate intervened at a landing zone where he and his Huey helicopter unit was ambushed in June 1969 by enemy fighters.

We toured much of the Washington Mall, walked through the World War II, read the inscriptions from the likes of Chester Nimitz, Franklin Delano Roosevelt, Dwight Eisenhower, George C. Marshall that paid tribute to the brave Americans who — along with soldiers from many other nations — saved the world from tyranny. My all-time favorite veteran, my father, was one of the 16 million Americans who answered the call to duty. I thought of Dad while marveling at the grandeur of the WWII memorial.

Not far from that is the Korean War Memorial, which pays tribute to the “forgotten war.” It, too, cost tens of thousands of American lives. I prayed for the souls of those who paid the ultimate sacrifice.

We cast our eyes on the Washington Monument, the Lincoln Memorial, the Jefferson Memorial and toured the FDR Memorial.

For several precious hours while taking all that in, I was able to set aside the events of the moment. I didn’t think a single time about the confusion, controversy and contentiousness of the present day. I thought instead of the great Americans who built the country and created a nation that remains — despite rhetoric to the contrary — the greatest nation in human history.

We had to see these things to remind us of who we are.

I watched a lot of the 50th anniversary celebration of the March on Washington event this week and came away with a single disappointment.

There was no sign of leading Republicans at the speaker’s podium.

Of course, leave it to the likes of Fox News loudmouth Bill O’Reilly to claim falsely that “no Republicans were invited” to speak.

The scheduling conflict dodge does bother me. All of these individuals knew long ago that this event was on the calendar. If they wanted to attend this event, they certainly could have had their schedulers ensure they would be available to take part — don’t you think?

Absent their presence anywhere near the DC Mall this week, many of the speeches were tinged with a bit too much partisan rancor from those who argued against legislation to make voting more restrictive, which is a largely Republican initiative being pushed on Capitol Hill and in state capitol buildings throughout the South — and that includes Texas.

There once was a time, about 50 years ago, when Democrats and Republicans locked arms for a single cause, which was equality for all Americans. I was hoping the two parties could put aside their differences to mark the 50th anniversary of one of the great days of the American civil rights movement.