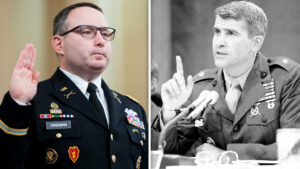 Vindman sat before the panel in his Army dress blue uniform. It then fell to a Republican member of the committee, Chris Stewart of Utah, to ask why he wore what was “not the uniform of the day.”

Vindman works on the National Security Council. He is an active-duty Army officer. He wears a civilian suit to work … usually. He chose to wear his uniform today, I suppose, because he thought it would be proper for him to wear the attire he is entitled to wear as a commissioned officer.

I want to mention this because other NSC officials have testified before Congress in their military uniform. One is most notable, as Roll Call notes: Marine Lt. Col. Oliver North, who sat before Congress during his testimony into the Iran-Contra matter of 1987. Did anyone raise a ruckus then? I do not recall it.

Moreover, other active-duty officers have worn their uniforms while at work in the federal government. Army Lt. Gen. H.R. McMaster, the former national security adviser to Donald Trump, being one of them.

Vindman  was in Congress today to testify about what he heard during that infamous phone call with Trump and Ukrainian President Volodymyr Zelenskiy that has prompted the impeachment inquiry against the president. He said some important things today and made some important assertions.

So, let’s not get sidetracked by something as ridiculous as whether an Army field-grade officer is entitled to wear his dress uniform.

Of course he is! 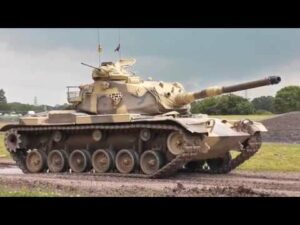 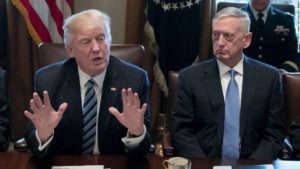 Put yourself into James Mattis’ boots for a moment.

You’ve just tendered a resignation letter that scorches the commander in chief’s methods of governing, of managing the nation’s foreign and military policies.

You have told the president of the United States you would stay in your job as defense secretary until Feb. 28.

But the president is so angry with you — with all the attention and love you’re getting from the media and politicians of both parties — that he’s decided to cut you loose early.

You’ll be gone instead by the end of December, just a few days from now.

How do you react to that? If it were me, I would be thrilled to death. Thrilled beyond words. Excited to get my life re-started. Secretary Mattis isn’t married, so he doesn’t have a spouse or children to share his joy, but my guess is that he’s cheering along with his best friends, siblings and other extended family members.

Donald Trump well may have done Mattis the biggest favor he could imagine. He has spared the retired Marine general from the chaos of another two months working within an administration where the cadence is being called by someone who is clueless about how government works. He doesn’t know how to forge and maintain strategic alliances. The commander in chief has no inkling of how his policy pronouncements via Twitter disrupt the normal flow of information.

Mattis brought a retired Marine Corps general’s order and discipline to the president’s inner circle, to his national defense team. He will take it all with him when he departs on New Year’s Day.

Meanwhile, Donald Trump will keep on bumbling his way toward an uncertain future as our head of state.

The newly department secretary of defense will be relieved of the insanity and chaos that now masquerade as presidential governance.

I know I would be. So would you. 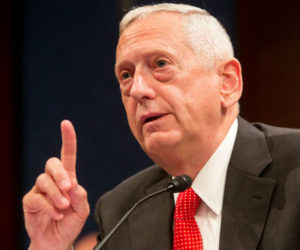 Chaos is running rampant throughout the executive branch of the U.S. government.

Nope. It isn’t a “fine-tuned machine,” no matter what Donald Trump calls it. It is a clanking, sputtering bucket of bolts with the wheels about to fly off the rickety machine.

Defense Secretary James Mattis has resigned, revealing specific differences of world view with the commander in chief. He becomes the eighth Cabinet officer to resign or be fired in the first half of the president’s term in office.

Three Cabinet officials quit under clouds of scandal. Three of them were canned outright. Yet another one resigned for reasons that weren’t entirely clear.

Now this happens. I happen to be a huge admirer of Secretary Mattis. I admire his military background, his studious nature, his commitment to the men and women in uniform. I admire his steady hand and his repeated resistance to the president’s impulsive nature.

He has had enough of the chaos. This decorated Marine Corps general can no longer answer to a commander in chief who operates the way Donald Trump seeks to operate.

Chaos is Donald Trump’s modus operandi. He revels in it with no understanding — none at all — of the misery and mayhem it creates for those who must deal with it up close.

And this all comes as the president responds to the bellowing of his political base and insists after all for money to build that wall along our southern border. What’s more, the government well might shut down partially at midnight Friday, putting thousands of federal workers out of a job right before Christmas.

This is a frightening time. James Mattis’s upcoming departure signals a growth in chaos at the highest — most sensitive — levels of our government.

Read Mattis’s resignation letter right here. Then ask yourself: Is this any way to run the world’s most indispensable nation?

This blog post is going to get me in trouble with some of my female friends.

Here goes anyway: I have trouble accepting that women are capable of performing as infantry personnel in combat.

There I said it. Now I’ll explain why.

The Washington Post reports on an experiment under way in the Marine Corps, where women will be taking the same Physical Fitness Test as men. As the Post reports: “The PFT requirement is the likely sticking point for many female Marines: To score a first-class PFT, men must do at least five pull-ups, assuming they rack up maximum points by running three miles in 18 minutes or less and complete 100 sit-ups. Under current rules for female Marines, women are not required to complete pull-ups.”

I’ll stipulate that I am well aware that women are performing well in some dangerous and deadly assignments in all branches of the military. They’re flying high-performance combat aircraft, as well as helicopters in close-air support roles on the battlefield.

Indeed, a young cousin of mine is now an Army master sergeant who has served multiple tours in Iraq and Afghanistan. Her earliest assignments in Iraq were with a civil affairs unit, which meant she would venture into villages to set up infrastructure for Iraqis — not knowing if the village was occupied by enemy combatants. In Vietnam we called the effort “pacification.”

I do not doubt that women can perform in two of the three combat arms: artillery and armor; the third one being infantry. They can drive tanks or armored personnel carriers and they can fire big artillery pieces.

I long ago disabused myself of the concern about women being emotionally capable of performing combat duty. I hold up my cousin as the prime example of a female soldier’s emotional stamina.

But does a typical 120-pound woman have the same upper-body strength as a typical 200-pound man, enabling her to lug around an 80- or 100-pound rucksack while slogging across some rough terrain?

I tend to think not.

Therein lies what I consider to be the problem with allowing women to serve as infantry personnel.

I fear this experiment is not going to work for either the Army or the Marine Corps.