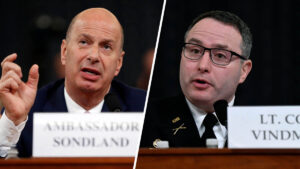 Gordon Sondland is a goner. So is Lt. Col. Alexander Vindman.

What did these two men do to lose their high-powered jobs within the Donald John Trump administration? They told the truth to congressional committees seeking answers to a phone call that the current president made this past July to the president of Ukraine.

Sondland, a hotel magnate, was the U.S. ambassador to the European Union. Vindman, a native of Ukraine (which was part of the Soviet Union when he was born) served on the National Security Council staff as an expert on Ukraine; oh, and Vindman also is a decorated Army hero who was wounded in battle.

The men told the truth as they understood it. They told congressional questioners about Trump’s phone call in which he asked Ukraine for political help. Vindman said the request troubled him when he heard the president ask for it. Sondland said it was “understood” that Trump was asking for a favor.

Trump won his acquittal this week from the Senate. He went to the National Prayer Breakfast and trashed Speaker Nancy Pelosi and Mitt Romney, the first senator in U.S. history to vote to convict a president of his own party. It was Donald Trump at his vengeful worst.

Now he has canned two men. One of whom, Vindman, is a proven patriot; the other, Sondland, is a dedicated Trump supporter who gave lots of money to elect the president in 2016. I should mention as well that Trump canned Vindman’s brother, who also served on the NSC. Vindman’s brother, Yevgeny, another Army officer, did not testify. Trump fired him, I guess, because his brother Alexander might have said something to him about the Ukraine matter. So, if one Vindman gets fired, let’s make it a clean sweep and get of them both.

Trump is mad as hell at them. There likely will be more firings to come.

Hmm. Rather than invoking the call for harmony and unity in the wake of his acquittal of abuse of power and obstruction of Congress, Donald Trump appears to be setting a course that seeks to exact maximum vengeance.

Yes, he is entitled to act this way. It still packs a serious stench.