Donald Trump accused former Vice President Joe Biden of being a “low-IQ individual” because of a slip-of-tongue moment in Delaware. Biden seemed to reveal that he’s decided to run for president next year, then he backed away from his (mis)statement.

That prompted the president to suggest that Biden isn’t very bright because he, um, misspoke.

I can’t stop giggling over that one.

Let me see if I have this correct.

Donald Trump stood next Vladimir Putin in Helsinki this past year and said he didn’t see any reason why the Russians “would” attack our electoral system in 2016. Oops! It took him a day or two, but then he said he meant to say that he didn’t see why they “wouldn’t” interfere as they did in our presidential election.

He recently referred to Apple Inc. CEO Tim Cook as “Tim Apple.” He was heard saying it. Then he backtracked. Trump said he inserted “Cook” quietly before saying “Apple.” OK. Except no one heard him say it.

Low IQ? Is that how one could describe the president because of his own frequently clumsy use of language? 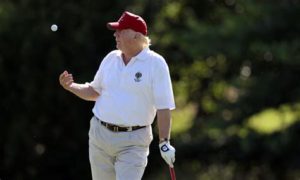 There can be no doubt about it. The Liar in Chief’s prevarications are getting bizarre in the extreme.

Donald Trump is now boasting about winning a golf tournament at his Mar-a-Lago, Fla., resort. Except that he didn’t play in the tournament!

Golf Magazine reports that a plaque has appeared in the men’s locker room at Mar-a-Lago proclaiming Trump to be the 2018 men’s champion of a tournament that went on without him.

The president played host to the CEO of Apple, Inc. at the White House the other day. He mistakenly referred to Tim Cook as Tim Apple. The reporters picked up on it. They reported it. It was recorded on live audio. I’ve heard it. Yep, the president said “Tim Apple.”

Furthermore, Trump said he inserted the word “Cook” quietly between “Tim” and “Apple,” but that the “fake news” reported only the “Tim Apple” reference to, um, embarrass the president.

Mr. President, you already are an embarrassment. You need no assistance from the media to shore up what many millions of us know about you already.

Apple boss Tim Cook has just burst out of the closet by declaring he is homosexual.

OK. That’s a big deal? I think not. He is who he is and that’s all fine and dandy.

Then comes U.S. Sen. Ted Cruz, R-Loony Bin, to suggest something else is at work here.

“Those are his personal choices,” Cruz said of Cook’s sexual orientation, meaning, I reckon, that Cook chose to be gay.

Cruz then added, “I love my iPhone.”

Is there any doubt now as to why Cruz and other outspoken Republicans are having trouble connecting with gay Americans?

I keep coming back to this notion a person’s sexuality is pre-determined. One doesn’t come into this world, in my view, grow toward adolescence, and then, when puberty kicks in, decide to become attracted to individuals of the same sex.

One’s sexuality is part of who they are. It’s in their genetic code, in their DNA.

For the freshman senator from Texas to ridicule someone’s sexual orientation by comparing it to his “love” for his iPhone cheapens the discussion.

As a friend once said to after me he revealed to the world many years ago that he had become infected with HIV/AIDS while also disclosing his own homosexuality, “Why would I ever choose to become the object of scorn and revulsion?”

He answered his own question. He didn’t choose it at all.