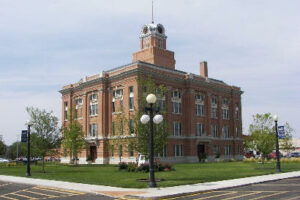 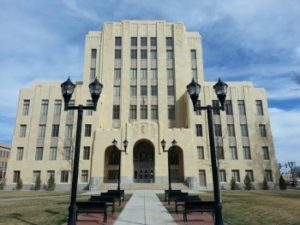 I have subscribed off and on to Texas Highways magazine for about the past, oh, 30 years … give or take.

My latest issue arrived in the mail while my wife and I were traveling west to Yellowstone National Park, Wyo., and Grand Coulee Dam, Wash.

I looked at the cover title, “Small Town Splendor: The Best Little Courthouses in Texas,” opened the magazine and found something that surprised the daylights out of me. One of the mag’s “best little courthouses” happens to be the Potter County Courthouse in downtown Amarillo.

Why is that a surprise? I expected the list to include really small town courthouses. Among the other 11 featured in the magazine, by the way, is the Donley County Courthouse in Clarendon — which is beautiful structure, too. Texas Highways notes: “The Panhandle’s oldest functioning courthouse, it boasts a distinctive asymmetrical design — no two sides of the building are the same.” 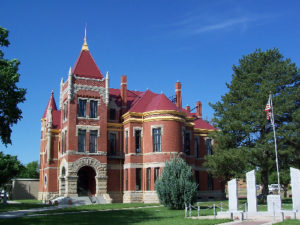 The Potter County Courthouse and the grounds on which it sits have become part of downtown Amarillo’s revival about which I have written extensively on this blog. The structure, built in 1932, is “what the Texas Historical Commission calls one of Texas’ best examples of art deco design.

The county applied for a state historical preservation grant to help restore the building. The county emptied the building, moved offices to other locations throughout the downtown district — including the Santa Fe Building and into the Courts Building, which former County Judge Arthur Ware refers to unflatteringly as the “grain elevator.”

The three-year project was done in 2012. The county moved the offices back into the building. County Judge Nancy Tanner established a security system for visitors.

The courthouse grounds have become the home field for downtown’s High Noon on the Square every summer, which features local musicians and other artisans entertaining lunchtime crowds.

The structure really is a gorgeous place for Potter County’s public servants to work.

Thus, I was heartened to see Texas Highways offer a tribute to downtown Amarillo’s courthouse.

Tex Randall has joined a lengthy list of roadside attractions that now have the imprimatur of the Texas Historical Commission.

Tex happens to be a statue that looms over U.S. Highway 60 in Canyon, Texas. The Historical Commission has unveiled a historical plaque that takes particular note of Tex’s significance to the Texas Panhandle.

Tex stands 47 feet tall. He weighs about 7 tons. He’s been standing alongside the highway since the 1950s. He recently received an extreme makeover. He got whitewashed and his limbs were strengthened. Then he got a fresh coat of paint depicting some new duds.

I certainly like the idea of putting a historical marker next to Tex.

I had the pleasure of writing a series of stories for KFDA NewsChannel 10 about these historical markers. Texas has tens of thousands of them along many thousands of miles of highway. I was able to learn about the Battle of Adobe Walls, Charles Goodnight, Woody Guthrie and a whole host of other events and colorful characters who helped shape the Panhandle’s history.

OK, so Tex isn’t a real guy. He’s just a gangly statue. However, he’s seen by a lot of people every day as they pass through Canyon. According to KVII-ABC7: “Texas has the largest historic recognition program in the country,” said Richard Bowers, Chairman of Randall County Historic Commission. “They’re to recognize important historical sites or where events occurred within the state and to be an arm of education for those outside and for our own people.”

I’m going to make a point of stopping at the marker next time I pass through Canyon to learn about Tex Randall’s historical significance to the region.

One of my favorite answers to the question “How are you doing?” is one I heard years ago … but it bears repeating.

There you have it. Life is good.

One of the highlights of my recent life has been the opportunity to continue writing and reporting on the community where I live. My full-time job in print journalism ended four years ago, but I’ve stayed busy.

One of the gigs has been with KFDA-TV NewsChannel 10. The folks at the Amarillo CBS affiliate gave me the title of “special projects reporter” when I started writing a feature for NewsChannel10.com. We called it “Whatever Happened  To … ?” It told stories about the status of big stories and big promises.

My bosses at News Channel 10 decided that feature had played itself out. So, together we came up with another idea.

“Roadside Attractions” is its name.

You’ve seen those historical markers scattered throughout the Texas Panhandle, yes? They tell motorists about events that happened at those sites. If not precisely at those locations, then they point you to where the event took place.

We’re going to tell the stories of historical markers. The idea is to give us all a glimpse back at our past. They’ll tell us how this region has arrived at this point. We’ll post the stories on NewsChannel10.com each Wednesday as the station airs the segment telling viewers about the markers profiled that week.

The Texas Historical Commission says the state has about 15,000 such markers. The Panhandle alone has hundreds of them posted along our farm-to-market roads, our state highways and our two interstate thoroughfares.

I’m going to search them out.

I’ll have some help in telling those stories. My friends at the Panhandle-Plains Historical Museum in Canyon have been helpful in the extreme so far. They have pointed me toward local historians and have given me plenty of background on the markers.

You won’t mistake these pieces as being a version of “On the Road” series that the late CBS correspondent Charles Kuralt made famous many years ago. I’m not nearly that good a story teller.

I’ll do my best, though, to bring you slices of local history as told through these markers. They’re everywhere, man. I’ll find as many of them as I can.

Michael Grauer, associate director for curatorial affairs at PPHM, calls himself a “stopper and reader” of these markers. Perhaps we can entice more of our viewers to become stoppers and readers, too.

I want to thank my friends at NewsChannel 10 for allowing me to keep doing what I love to do. It’s been a blast so far.

Let’s enjoy the ride together.

Social media can be quite a boon to finding answers to nagging questions in a hurry.

The other day I posed a question on Facebook about the whereabouts of a battle tank that once “guarded” one of the doors to the Potter County Courthouse in downtown Amarillo.

I got my answer … quickly. It’s been moved to Pampa, about 60 miles northeast in Gray County.

The tank is now sitting proudly with some other war relics.

I mistakenly referred to the tank as an M-48. It’s actually newer than that; it’s an M-60.

Potter County Judge Arthur Ware put the tank out there after then-Justice of the Peace Jim Tipton — a fellow Marine — procured the vehicle from someone, whose identity escapes me at the moment.

Ware, who is leaving office at the end of the year, told me several times over the years how proud he was to have the tank out there. He said it symbolized some memorial to veterans who had served their country. Ware, a Marine reservist, was called up during the Persian Gulf War in 1990-91 and went into battle with his fellow Marines against the allegedly vaunted Iraqi Republican Guard.

The tank stood there for many years. Then the county sought some historical preservation grant money to restore the courthouse. The rules from the Texas Historical Commission are quite restrictive, as they should be. The county sought to return the courthouse to its original pristine state, which in 1930 did not include the tank on the grounds.

The tank had to go. Period.

So the county found a suitable home for it.

I’m glad it hasn’t been scrapped. I also am glad the state historical preservationists stuck to their guns — so to speak — by ordering the county removed from the courthouse grounds.

The county did a good job of restoring the grand old building — while obeying the rules that took an old weapon of war to another location.