Wow! I actually am longing for the days when some folks got all riled up over the color of the suit the president might wear while talking in the White House press briefing room. 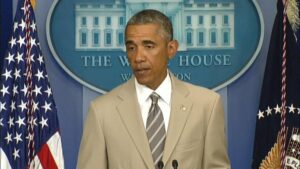 It was a bit more than five years ago when President Obama showed up wearing the tan suit. Remember that one? Why, you woulda thought the world had been swallowed into a black hole, that the president of the United States had gone batty, that hell had frozen over and that the Martians had landed … for real this time!

According to Yahoo.com: In addition to being generally panned by fashion experts, Obama’s light-hued look, worn to a White House briefing, scandalized cable news pundits. Lou Dobbs called it “shocking,” while Republican congressman Peter King said it represented POTUS’s “lack of seriousness” in the wake of recent ISIS attacks.

Hey, does anyone remember the plaid suit that President Ford wore on occasion? I think the president was stylin’ back in the 1970s. Imagine any president today appearing that getup.

Well, we’ve progressed — or perhaps regressed — to bigger scandals these days. The sharply dressed president of the moment, Donald J. Trump, is accused of impeachable offenses and is awaiting, along with many of the rest of us, the moment he becomes the third president impeached by the House of Representatives.

But what the heck. He wouldn’t be caught dead in a tan suit.

This is a head-scratcher.

Social media kinda/sorta went off the rails today when President Barack Obama showed up in the White House Brady Press Briefing Room wearing — get ready for it — a tan suit.

I only can conclude that some folks out there in Cyberland have too much time on their hands.

Heck, I suppose you can the same thing about me, as I’m commenting briefly on this matter.

This is just a matter of personal taste, I suppose, but I thought he looked pretty good today in tan. Should he have worn a dark blue suit, or perhaps a black one, given that he was talking about serious matters of state? I don’t know. Nor do I really care.

I was struck a little by the Twitter chatter over the tan suit by my recollection of how President Gerald Ford dressed as he was toiling in the White House back in the 1970s. If you’re old enough, you might remember seeing President Ford attired in a plaid suit.

Oh, but I forgot. Some folks actually poked at Barack Obama because he didn’t wear a tie while commenting on the hideous murder of an American at the hands of terrorists in Syria.

Let’s all give it a rest. Tan is a perfectly proper suit to wear. Stick to issues that matter.

Thus, this will be the only time I will comment on Barack Obama’s choice of suit color.