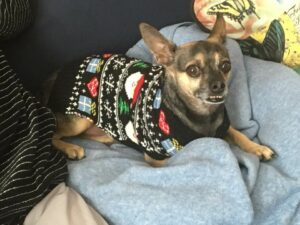 It’s one thing to move to a new community, a new home and becoming acquainted with new surroundings during most of the year.

It’s another thing altogether when you welcome the Christmas holiday amid all that newness. Why, even Toby the puppy — as you can see in the photo — is wearing some new Christmas threads.

So a new holiday awaits my wife and me — along with the Puppy — in our new digs in Collin County. We spent 23 or so Christmas seasons ensconced in our home in southwest Amarillo. We grew comfortable in that home, which we had built in the fall and early winter of 1996.

Indeed, our first Christmas in that home was one for the ages. We closed on the house on Dec. 22, 1996, took possession of the place, then had most of our worldly possessions hauled out of storage where it had laid dormant for nearly two years.

We spent Christmas opening up boxes and getting reacquainted with pictures, furniture, doo-dads, knickknacks and assorted gadgets and gizmos we had locked away.

Our Christmas tree that year was a potted Norfolk pine we brought with us from Beaumont. We strung a few lights around it, tossed a little tinsel on it and surrounded it with gift packages.

We moved from Randall County to Collin County in the spring of 2018. Then earlier this year we decided to look for a house to purchase. We found one in Princeton, closed the deal and moved in. That all took place in late February.

Now our first Christmas in our latest new home is coming up fast. It won’t have quite the same element of rediscovery as the holiday I described earlier. However, it will be memorable nonetheless. Of that I am certain.

My biggest challenge now rests with trying to decide how to string lights around our new house. Wish me luck.