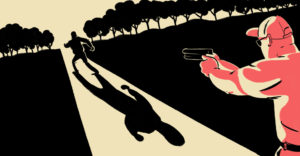 A man shoves another man to the ground; the fellow who does the pushing is unarmed. The guy on the ground, pulls out a pistol and shoots the other man in the chest. The first gentleman then staggers into a convenience store, collapses in front of his son, and then dies at a local hospital.

The Clearwater, Fla., authorities, though, say they won’t charge the shooter because, they explained, he acted in accordance with the state of Florida’s “stand your ground” law.

The law needs a careful re-examination. Indeed, it needs to be rewritten, in my humble view.

The man who died was Markeis McGlockton, who was at the store with his 5-year-old son and his girlfriend. The victim’s girlfriend, apparently had been hassled by the shooter, Micheal Drejka, because she was parked in a handicapped-only zone.

McGlockton saw the confrontation, then ran to defend his girlfriend. That is when he pushed the other fellow to the ground.

This constitutes a “stand your ground” incident? I don’t get it!

I mean, good grief, McGlockton was walking away from Drejka when he got shot! How in the world does that present a clear and present threat to the shooter?

As CBSNews.com has reported: Criminal defense attorney Anthony Rickman says the fact that McGlockton backed up after the shove raises concerns.

“The question is, at that point in time, was there the possibility of imminent serious bodily injury or death of Drejka that justified the use of deadly force? And after watching that video, I don’t think so,” Rickman said.

We’ve had this national debate already. The Florida statute came into play when George Zimmerman shot Trayvon Martin to death after he spotted the youngster walking through a neighborhood that Zimmerman was patrolling as a private security officer.

Michael Drejka has emerged as yet another embodiment of a law that gives license to individuals to shoot first and … well, the consequences be damned!

It’s a fair question to ask, so I’ll ask it: Is George Zimmerman a time bomb ready to explode?

Zimmerman has been arrested — yet again — on an aggravated assault charge. You’ll remember this guy. A Sanford, Fla., jury acquitted him of murder in the shooting death of Trayvon Martin in a case that drew international attention and notoriety.

Zimmerman was a private security officer who got into a scuffle with Martin. He shot the young man to death and the issue turned on whether Zimmerman stalked Martin because the teenager was black.

Quite clearly, I didn’t witness the event or the trial. I wasn’t privy to the evidence.

But I’ll pose this question, too: Is it possible the jury got it wrong?

Zimmerman’s arrest is the fourth since his acquittal. His former wife accused him of threatening to shoot her; she didn’t pursue the case. A girlfriend accused him of assaulting here; she dropped the charges. Then this guy got involved in a road-rage case.

Now this. The latest incident involves an accusation that Zimmerman tossed a bottle at yet another girlfriend and he’s been charged with aggravated assault.

Hey, this kind of thing normally wouldn’t matter. Except that Zimmerman isn’t your average, run-of-the-mill loser. He became the face of a Florida “Stand Your Ground” law. The jury said he had a right under the law to protect himself with deadly force against someone jurors said was threatening him.

I know he can’t be tried again for the Martin death, but this guy cannot seem to steer clear of trouble.

Or does he look for it?

Ted Nugent doesn’t speak for most reasonable Americans. He speaks for himself and the crazed lunatics among us who share his racist, homophobic, xenophobic world view.

He sits on the National Rifle Association board. A group called “Stop Gun Violence,” an acknowledged foe of the NRA, wonders why the pro-gun group doesn’t boot Nugent off its board.

Why, indeed, doesn’t the NRA act?

The Motor City Madman has been on a roll of late, as the link attached to this blog post will attest. No need to repeat his rants. Suffice to say he is out of control.

He makes news when he twists off the way he does because he once was a reasonably popular rock musician. He now has become caricature of himself and the views he espouses.