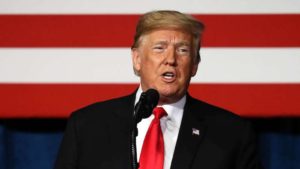 Hold on a second! Donald J. Trump now says he supports the notion of allowing public school students to study the Bible. He endorses the idea of students learning about the history of the Judeo-Christian holy book.

Let’s put the brakes on that one.

The founders created a secular document to govern the United States of America. The very first clause in the very first amendment to the U.S. Constitution establishes a rule that Congress “shall make no law” that creates a state religion.

Legal scholars and courts have interpreted that to mean that government agencies — and that includes public schools — must avoid traveling down the slipperiest of slopes by allowing religious study in tax-supported schools.

So what is the president trying to do? My best guess is that he believes that the U.S. Supreme Court — which includes two justices he has appointed — would rule in favor of Bible study in public schools if the issue ever to reach the highest court on appeal.

Trump wrote this on Twitter: Numerous states introducing Bible Literacy classes, giving students the option of studying the Bible. Starting to make a turn back? Great!

Legislators in six states are proposing Bible study in public schools. I guess it’s some sort of move to return “prayer in school,” which the Supreme Court rule in the early 1960s violates the First Amendment’s implied separation of church and state.

There’s a place for everything in this world of ours. I believe firmly that the place to study the Bible is in a house of worship. We should make our public schools the place where students can learn about math, science, civics, humanities, theater . . . and the whole host of curricula that teach them about their earthly world.

I’ll just offer this notion as well: If we are going to study the Bible in public school, do we then allow the study of works read by our non-Judeo Christian citizens?

That’s what I mean by the “slipperiest of slopes.” 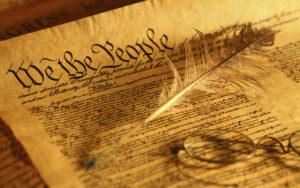 A former colleague and critic of this blog made a fascinating — and legitimate — point while participating in an exchange about a post I wrote about a guest columnist whose work appeared recently in the Amarillo (Texas) Globe-News.

I asserted in my own critique of the essay that the nation’s founders established a “secular government” when they wrote the U.S. Constitution.

However, that doesn’t dissuade me from insisting that the Constitution is as secular a document as it possibly can be.

The founders were direct descendants of people who migrated across the Atlantic Ocean to escape religious persecution, among many other repressive actions brought on them by their European rulers.

They launched a revolution in 1775. They gathered in July 1776 to sign a Declaration of Independence, which does contain a reference to the “Creator” and to “Nature’s God.” Neither term, though, is specific to Christianity. Each of them could — if one were to interpret them liberally — refer to any of the world’s great religions. Some of us today, though, choose to ascribe Christian theology to any reference to the Creator or to God.

Eleven years later, after we won our independence from the British Empire, our founders crafted the Constitution. They specifically avoided using the term “Christian” or “Jesus Christ” or even “God” or “Creator.” Did they bicker and quarrel among themselves while putting this governing framework together? Of course they did.

I remain committed to the document they produced, the one ratified by the 13 states comprising the United States of America. I have scoured it repeatedly over many decades and I have yet to find any reference to religion, other than in the First Amendment, which states that “Congress shall make no law respecting an establishment of religion … ”

Are we a nation “of Christians”? Certainly. Are we a “Christian nation”? Certainly not.

There. Does that settle it? Hah! Hardly. 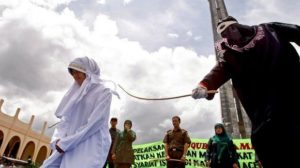 Donald J. Trump today invoked Sharia law as he was telling us how we should perform “extreme vetting” on all immigrants seeking entry into the United States.

The Republican presidential nominee doesn’t appear to be a religious scholar, or a constitutional scholar for that matter.

Well, I know little about Sharia law. I know a little more about the U.S. Constitution, although I certainly am no constitutional scholar.

So I just prefer to add this point: The Sharia law canard has become the No. 1 fear tactic being employed by those who hate Muslims. Moreover, those who invoke the fear of Sharia law ignore — perhaps willfully — some key provisions in the Constitution.

Sharia law is an extreme form of Islam. It’s fundamentally antithetical to mainstream Islam. It condones “honor killings,” and imposes stricter-than-strict rules about how one should follow the Islamic faith.

Could anyone ever impose Sharia law in this country, forcing non-Muslims to adhere to it? Never in a zillion years!

The Constitution prohibits it. Last time I checked, the Constitution is the law of the land. Every federal and state statute enacted at every level of government must adhere to the Constitution. Same with any municipal ordinance or rule. They, too, must be constitutional.

Trump said he wants to keep anyone who would impose Sharia law in the United States. Others have said much the same thing.

The founders of this country set up a multi-tiered system of government, which they expressly declared it to be secular.

The feds sit at the top tier. Then we have states, with laws written by legislatures. Then we have cities and counties. In Texas, counties are governed by state statute. Cities, though, generally have home-rule charters that enable governing councils to enact ordinances and other rules that residents must follow.

Does anyone actually believe it is possible to impose Sharia law at any level of government in the United States of America? 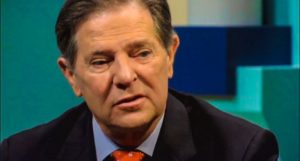 Tom DeLay knows his audience and he speaks their language.

In this case, the former U.S. House majority leader was speaking a couple of years ago on a religious program hosted by John Hagee Ministries.

If only, though, he would speak accurately about the very founding of this great republic.

Host Matt Hagee asked DeLay where he thought the nation had gone wrong. DeLay’s response was, shall we say, more than little off the mark.

“I think we got off the track when we allowed our government to become a secular government,” DeLay explained. “When we stopped realizing that God created this nation, that he wrote the Constitution, that it’s based on biblical principles.”

Where do we begin?

We’ve had a “secular government” since its very founding. The Constitution — as I’ve noted in this blog before — contains precisely two religious references. That would be in Article VI, which declares that there should be “no religious test” for anyone seeking election to public office; and in the First Amendment, where the founders declared there would be “no law respecting an establishment of religion.”

The founders knew precisely what they were doing when they omitted any other religious references in the Constitution. They intended for the government to be free of religious pressure or coercion.

I happen to be totally OK with that.

This gets to the debate that continues to this day. Indeed, it’s been going on virtually since the United States of America emerged from its revolution.

The Rawstory item showed up on my Facebook feed today I suppose as a reminder that this national debate likely never will go away.

Can’t we just accept the notion that the founders built a government framework that would be free of religion, but which allowed each of us to worship as we see fit?

That happens to be — in my humble view — one of the true-blue beauties of a secular government. 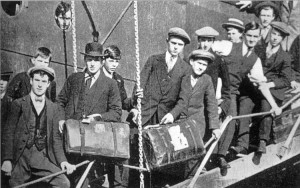 I feel like the Linda Blair head-spinning character in “The Exorcist” while I listen to some of these arguments that we need to ban refugees from entering the United States of America.

Well, consider that our very founding occurred because Europeans sailed across the Atlantic Ocean to flee religious persecution. They came here, set up villages and encampments and eventually founded a secular government that expressly forbids the creation of a state-sponsored religion.

Our nation then grew. We received a statue in the late 1880s, erected it in New York harbor and welcomed more refugees to our land.

Throughout the centuries, refugees and other immigrants helped build the greatest country in world history. My four grandparents were among those who came here, not as refugees, but as immigrants looking to create better lives for themselves.

Now the discussion has devolved into whether we should accept refugees who are fleeing civil war in the Middle East. Many of us fear that those refugees will include terrorists burning with the desire to harm Americans.

I share the concern. Really, I do. However, I refuse to believe we should act fearfully. Yes, we need to be vigilant to protect our nation against those who seek to do harm. Then again, we’ve always had that concern. The United States — or any nation with an open-door policy toward immigrants — always has been vulnerable to attack from those posing as mere opportunity-seekers.

But are we a nation founded and built by immigrants that is now going to slam the door shut on those who still believe this is the Land of Opportunity?

I hope this is not what we’re becoming.