Tedd Mitchell has been named interim chancellor of the Texas Tech University System. Fine. Go for it, Mr. Mitchell … whoever you are.

I am still waiting to hear a thorough explanation from the Tech regents as to why they dropped the anvil on one of genuinely good guys in Texas politics and public life, the lame-duck chancellor, Bob Duncan.

Duncan announced his retirement effective Aug. 31. Why so quick? Why so sudden? Because five of the nine regents gave him a no-confidence vote in executive session — which is another story altogether; I’m likely to have more on that down the road.

Texas Tech’s constituents need to know why Duncan, a man wholly devoted to the university, was shown the door in a secret vote. To date — and I’ll admit to being a good distance away at the moment — I have yet to hear anyone offer an explanation on what the slim Tech regent majority saw in Duncan that it didn’t like.

There have been rumblings and rumors about the proposed Tech school of veterinary medicine which the school wants to build in Amarillo. Reports indicate that Texas A&M University System officials got to Gov. Greg Abbott and asked him to pressure Duncan to back off the vet school idea. But then the Tech regents issued a statement reaffirming their support for the vet school.

Which is it, regents?

Duncan said all the right things when he announced his retirement. Those of us who know the chancellor want to know the story behind the story.

I must remind the regents that they constitute the governing body of a public institution funded by public money. They work for the state, which comprises 27 million or so “bosses” who need to know the whole story. 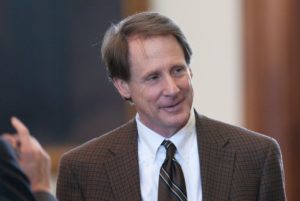 I have to hand it to the Texas Tribune’s Ross Ramsey: The man knows how to lay political injustice out there in the great wide open for all to see.

Ramsey thinks Texas Tech University System Chancellor Bob Duncan got hosed by the university’s board of regents. They voted — possibly illegally in an executive session — to issue a no-confidence verdict on Duncan.

What does Ramsey think of Duncan? Get a load of this excerpt from the Texas Tribune: He has been solid gold the whole way: As a legislative staffer, a lawyer working for state Sen. John Montford, D-Lubbock; as a member of the Texas House and then a state senator; and finally, as the chancellor.

No scandals. No meaningful enemies (until now, anyway). His has been a stellar career. It’s what the optimists hope for and what the pessimists bet against. He’s straight out of a Frank Capra movie, or a civics textbook. Imagine a guy walking through a spaghetti factory in a white suit and leaving without a spot on him. Duncan is really something.

Which is why it’s a shame that the rest of the crabs pulled him back into the bucket. The regents at Texas Tech showed their mettle — demonstrating why they’re little fish and not big fish — when a more brazen academic institution bellowed about their plans to launch a veterinary school in the Panhandle. Texas A&M University, headed by former legislator, railroad commissioner and comptroller John Sharp, believes one vet school is enough.

Ramsey thinks that someone connected to the A&M System got to Gov. Greg Abbott, who might have told the Tech regents — who are appointed by the governor — to reel Duncan in.

What is galling to me is that regents haven’t yet given a hint of detail as to why they want Duncan to leave the post he has held for the past four years. By most observers’ reckoning, he was doing a bang-up job as the system’s chief administrator.

Regents have sought to cover their backsides by declaring their continued support for the school of veterinary medicine in Amarillo. That’s great!

First things first. They need to explain to Tech’s constituents why they have pushed a “good guy,” as Ramsey described Duncan, over the proverbial cliff.

I don’t rely on my trick knee as much as I did in the old days. It’s led me astray too many times, such as when its throbbing told me Hillary Rodham Clinton would be elected president of the United States in 2016.

It’s throbbing yet again. The source of the pulse happens to be a possible — or perhaps it’s now probable — school of veterinary medicine in Amarillo.

We might be witnessing the tangible benefits of having an economic development corporation at work on behalf of Amarillo. The Amarillo EDC is expected to step it up Tuesday in its effort to persuade Tech to build the veterinary medicine school here. The project is expected to cost about $90 million.

What’s more, the Mariposa Village Community Land Trust has donated the land for the Texas Tech School of Veterinary Medicine. That, dear reader, is a huge development.

The Amarillo City Council is expected to make some announcements soon, possibly Tuesday, about the the Texas Tech project. I’ll wait along with the rest of the community that is interested — and supportive — of Tech’s possible new academic addition to the Texas Panhandle.

Mary Emeny is a friend of mine with a particular interest in a plot of land that she hopes will become home to a new school of veterinary medicine.

She chairs a trust that donated the property to Texas Tech University, which is considering whether to build a vet school in Amarillo.

I, of course, have no such vested interest. I merely want to endorse my friend’s column that appeared in the Amarillo Globe-News that pitches hard for the vet school.

Texas Tech University regents have declared their intention to build a vet school. Tech is getting a lot of push back from Texas A&M University, which at the moment has the only veterinary medicine school in Texas. A&M Chancellor John Sharp wants to keep it that way, or so it appears.

My own view is that Texas is a large enough state to accommodate more than one university’s desire to educate veterinarians. We comprise 28 million residents, spread across nearly 270,000 square miles. Tech regents — and Chancellor Bob Duncan — want to establish a veterinary medicine campus in Amarillo that could help train and retain vets who come from the Texas Panhandle and who might want to stay here after they earn their DVM degrees.

As Emeny writes in the Globe-News: Even as we urbanize, our base is still ranching, and more recently dairy and hogs, with farming that supports them all. The veterinary school will bring much needed assistance to overworked veterinarians, especially those that tend to large animals in the region. Moreover, it will do so in a wonderfully elegant way. By assigning students to practicing veterinarians in the area, the vets become the mentors and the students assist the vets. Such a model bypasses the need for a separate teaching hospital, significantly reducing student tuition while giving local vets a platform for interaction and ready access to the latest knowledge and technologies.

Does any of this diminish A&M’s role in training veterinarians? Of course not! It does add to the pool of aspiring veterinarians to a community — such as the Panhandle — that can serve a region with a compelling need for them.