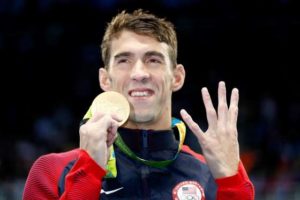 Right there, I believe, lies the key to why the Rio de Janeiro Olympics have me so damn spell-bound.

It comes from a friend of mine’s social media post. You go, Jim!

It’s not just Michael Phelps’s quest for more Olympic swimming history, as if he hasn’t made enough of it already while splashing through the water for the United States of America.

And it’s not just Donald J. Trump’s trash talk that’s infuriated me as I watch this miserable presidential campaign unfold … although I admit that the GOP nominee has played the major role in that element of disgust.

Watching these young people compete has been quite joyful for me.

I didn’t expect it.

I instead expected most of the TV coverage to center on the dirty water, the Zika-virus-bearing bugs flying around Rio, the corruption of the Brazilian government and the crime that plagues one of the world’s great cities.

We keep hearing these great stories about Phelps conquering demons, about our U.S. female gymnasts living up to their huge hype and winning all that gold, about friendly rivalries that span the globe.

OK, so not all of it has been warm and fuzzy.

We’ve had the smack-down between a U.S. swimmer and her Russian rival over doping and the controversy associated with the entire Russian team’s participation in the Games; we’ve heard some criticism of one of our gymnasts for failing to put her hand over heart while the National Anthem was played during the medal ceremony; there’s been this and that on the sidelines seeking to distract us from the athletic competition.

The presidential campaign awaits us after Labor Day.

Donald Trump will keep talking trash. Hillary Rodham Clinton will respond with her own brand of smack. Our disgust will mount. I am not looking forward to the final days of this campaign, as I’m sure they will bring out the worst in the candidates — not to mention the worst in voters who will work themselves into an all-out lather over what the “other” party’s candidate is saying.

I’m going to focus my attention for the next week on Rio.

The rest of it will be waiting when the Olympic flame goes out.